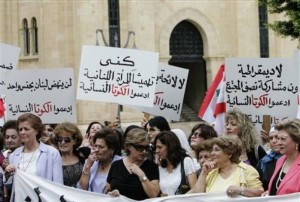 Throughout history, women have often considered themselves as living in a male oriented society. Thus so, we find that most innovators in practically all fields happen to be men. Be it arts in its liberal or conventional forms, music, economy, religion ,science or philosophy, even war, men have always been the primary movers and shakers, but one field which stands exceptionally to be extremely male dominant is Politics. Slowly but gradually, women were able to infiltrate this male abundant world, and were able to stamp their mark on most fields. But politics still remains an extremely tough nut to crack for those who do not possess a Y chromosome, and in a country such as Lebanon, who remains ever stuck between its Eastern ancestry and its Western aspirations, women’s rights, specifically women’s political rights, haven’t been considered as a sweeping issue, and the matter seems to be swept under the rug for the time being. All that considered, what is the situation of the Lebanese woman in politics?

To fully grasp the issue, one has to look at it through a more global view point. Women find themselves divided between the Western world and the Eastern world. In the fields of politics, Western women seem to thrive lately. Be it the Thatchers and Albrights of the past few decades, or the Merkels , Clintons and Pelossies of current times, women seem to be finding their feet in politics considering that apart from a German prime minister, both the US and French presidential elections have seen prominent women candidates. The brightest example being the 2008 US Presidential elections where a women was a few votes short of clinching the democratic party nomination while another was nominated as vice president.

The situation in Eastern societies seems to be more bleak, with women often having their basic rights compromised not to mention their political rights. In many Arab fundamentalist countries, women have basic rights taken from them such as the right to drive a vehicle, so considering their lack of political rights isn’t so shocking after all. Even Arab countries who seem to market themselves as ‘Western friendly’ are far from having women participate actively in the political process. Even the Arab women who convey an image of power and of political effectiveness seem to have got there either through their spouse or their kin, an avid example is the Jordanian Queen Rania.

So where does all that leave Lebanese women who are looking for a political career?

Well the signs aren’t in their favor. Lebanon has followed the norm set by its Arab neighborhood and has a more conservative and traditional view of women in politics. Truly the number of women in politics is appalling with less than 5% of current parliament members are women. But the real setback is the type of women who get into Parliament. Regardless of religion, creed or Party, Most Lebanese MPs seem to have gotten their seats depending on their spouse and or their families, much like the Arab example, with none of these women having an actual saying in the day to day running of their parties or their country. So with over 50% of the Lebanese population being female, its time for women to take a stand and truly let their voices be heard, since parliament should be a reflection of a society not just the men who seem to rule it.