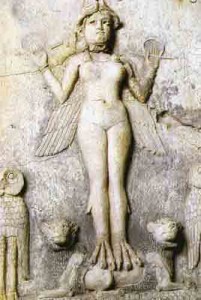 Following an interesting post by one of Red Lips High Heels authors, Night Shadow, I found a quite interesting analysis of the ‘Lilith Myth’, comparing it to the stories of Adam and Eve, and linking it to a patriarchal husband, a weak submissive wife, and a vindictive dominating ex-wife, while portraying the Male Fear of Dominant Women. Here are few excerpts, beginning with Aristotle:

Women according to Aristotle:

“Aristotle was obsessed with his penis, that much is evident from a psychologically perspective. According to Aristotle, the penis and its semen is the source of all souls and spirit, and that women, being “mutilated” and without a penis is soulless. He goes into more detail, believing that women are unable to create souls because they themselves are “impure” and “incapable of concocting the nutriment in its last stage into semen. If she does have a soul, it is an “impure” one, and thus needs a man’s “purity” in the form of semen. In short, Aristotle likely believed that the world revolved around his penis.

Going further on Aristotle’s beliefs, if women are soulless, then their feelings don’t matter, and thus men must be the masters over women because women are cold, heartless and lack authority. He admits that women have intelligence/faculty, “but it is without authority” and thus men must be the masters. The end result is that Aristotle likely believes that the perfect woman is a “mutilated” quiet, cold, and submissive creature, something similar to Helen of Troy or Andromeda.

As the exact opposite, the worst woman by his definition would likely coincide with many of the mythological creatures of his time. The medusa, sirens, gorgons and harpies portray intelligent women as cunning, powerful, independent, and yet deformed monsters. They would still be “mutilated” by Aristotle’s definition, and would suffer the consequences for their independence, for they were all defeated by men. In essence these myths could be considered allegory warning women not to become independent and proud of their intelligence”.

In the Biblical Genesis (the King James/Yahwist version), Eve is portrayed as being lesser than Adam by the simple fact that she is made by only part of him, and is not made wholly of the earth like Adam was. This shortcoming is then shown when she is tricked so easily by the serpent into eating the fruit from the Tree of Knowledge of Good and Evil, and she in turn manipulates and tricks Adam into also eating of the tree. Furthermore, when caught and questioned, Eve quickly blames the snake for her shortcomings. Thus Eve presents parts of both archetypes, the submissive woman who is easily tricked by the snake, but after eating the fruit, she becomes the cunning and manipulative woman who seduces/tricks Adam.

In a different version of Genesis, the ben-Sira version, the person known as Lilith (Adam’s first wife, before Eve) is introduced:

“When the Almighty created the first, solitary man, He said: It is not good for man to be alone. And He fashioned for man a woman from the earth, like him (Adam), and called her Lilith. Soon, they began to quarrel with each other. She said to him: I will not lie underneath, and he said: I will not lie underneath but above, for you are meant to lie underneath and I to lie above. She said to him: We are both equal, because we are both created from the earth. But they didn’t listen to each other. When Lilith saw this, she pronounced God’s avowed name and flew into the air. Adam stood in prayer before his Creator and said: Lord of the World! The woman you have given me has gone away from me. Immediately, the Almighty sent three angels after her, to bring her back. The Almighty said to Adam: If she decides to return, it is good, but if not, then she must take it upon herself to ensure that a hundred of her children die each day. They went to her and found her in the middle of the Red Sea. And they told her the word of God. But she refused to return. They said to her: We must drown you in the sea. She said: Leave me! I was created for no other purpose than to harm children, eight days for boys and twenty for girls. When they heard what she said, they pressed her even more. She said: I swear by the name of the living God that I, when I see you or your image on an amulet, will have no power over that particular child. And she took it upon herself to ensure that, every day, a hundred of her children died. That is why we say that, every day, a hundred of her demons die. That is why we write the names Senoi, Sansenoi and Semangloph on an amulet for small children. And when Lilith sees it, she remembers her promise and the child is saved.”

According to accompanying legends, Lilith was cursed and turned into a succubus. God created Eve as an afterthought out of Adam’s rib, in order to make her more submissive. Lilith’s descendants and Eve’s descendants mingled together and bred, and God decreed that Lilith is kill all of her descendants, except for those protected by an amulet. This belief that Lilith will come to slay young children is still held in awe today in many cultures. As the mother of all other succubi, Lilith’s daughters (succubi, or simply “Liliths (according to some tales) are also held to this and cannot harm any child protected by the amulet. This is Lilith’s curse for being too dominating according to many tales, although it is also questioned as to whether the real reason is because she spoke God’s avowed name.
Other Biblical and non-Biblical legends* portray Lilith as being a “terrible mother-goddess”. Her clergy is described as being “temple prostitutes” according to some historians. This belief changed over time, with Lilith (or succubi in general) becoming the “divine whore” according to men, described as being a tall beautiful, obsidian-skinned, bat-winged female with long red (some legends say black) hair and sharp blue eyes. This creature then seduces men and kills them. This is a perfect example of men describing the physical characteristics of women, and also their obvious fear of being powerless against a woman and controlled by them.

There are many other legends (mostly Sumerian, Babylonian and Assyrian) calling Lilith (or creatures like her) by other names such as Shedu, Lamashtu, Marilith, Succubus, Ahhazu, Alu, Gallu, Lamia, Ishtar. The legend of Lilith is so widespread that it reaches even Malayasia where she is called Langsuir (or Langsuyar) and feared as a demon seductress of the night. This enforces the idea that man’s fear of seductive/dominating women is universal amongst all men.

The Spanish Inquisition, Witch Hunts and the Lilith Demon:

During the Spanish Inquisition (and various other witch hunts), witches were associated with the demon Lilith, and anyone having red hair like Lilith were more likely to be hung or burnt at the stake. This perhaps is the reason why red hair is so rare and also why the current stereotypes that all red-haired people are regarded as aggressive, hot tempered, troublesome, and otherworldly. These witch hunts were led by men, usually clergy, who were obviously afraid of being bewitched, seduced and controlled.

Power Struggle between the sexes:

The power struggle between Adam and Lilith is a reflection of the power struggle between the sexes, a man’s patriarchal attitude versus a woman’s demands for independence and equality. Psychologically, this is the result of Adam’s fear of Lilith being in control, Lilith’s equal fear of Adam being in control, and both rejecting the others demands for dominance. Adam and Lilith obviously could not meet with a marital therapist however, but since the two are viewed as being mythical characters, then they reflect universal characteristics and behaviour such as all people’s (not just men’s) fear of being controlled.

A number of modern psychologists/analysts have studied the ben-Sira version and have come up with their conclusions about Lilith, Adam and Eve, and their archetypes:

Vogelsang asserts that Adam bears the guilt for the disagreement. “From the beginning [he] was trying to assert his superiority and to dominate her, a power play on the part of the masculine.” He also says “it should be emphasized that she was not trying to subjugate him. She was trying to maintain her rights.” Essentially this means that Adam represents the average aggressive male, whereas Lilith should actually be considered a model female who stands up for her rights. Perhaps women should be feared, for it is the fear between both sexes that makes them equal.

Lenherr-Baumgartner claims that Adam’s demand for the upper position was the result of “is evolutionary understandable as a certain male fear of an equal female. In addition she considers the separation of the two metaphorical in the sense that male and female shall be forever separated by their fears of each other.”