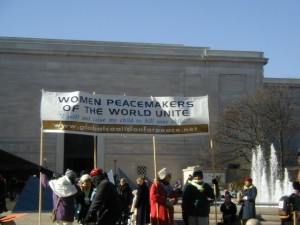 I was lately told that I am not a warrior and it offended me. True I am not villainous, I do not use physical weapons or Machiavellian schemes, nor do I play games to get what I want – even if there are women who do in the Middle East. True I am a pacifist and advocate dialogue and conviviality. True I tend to assess people starting with +10, not 0, nor -10. True I tend to be more patient than others and give countless ‘chances’ at all levels. However, it doesn’t mean I am ‘soft’, ‘weak’ or ‘sweet’. I am a warrior, but my battlefields are different.

Women and Men can be violent. Women and Men can be peacemakers… I don’t believe in a pure dichotomy between men and women: violent versus peaceful. Still, while too often reporting of women in conflict situations shows them as powerless victims, the reality, often glossed over, is that in post conflict situations women are in the forefront when it comes to negotiating and building peace. As Secretary-General Kofi Annan has pointed out, “Women, who know the price of conflict so well, are also better equipped than men to prevent or resolve it. For generations, women have served as peace educators, both in their families and in their societies. They have proved instrumental in building bridges rather than walls.” There are many stories that remain to be told about women from all walks of life who are making a quantum leap from lives in the private sphere to leading the way in reshaping their societies.

Women as torchbearers of peace are making a difference in hot spots of every region of the world. Palestinian and Israeli women have joined forces and work together as advocates for peace. In Nepal, women who were victims of violence are seeking representation in peace talks between the government and Maoist rebels. Women’s Peace Caravans venture into the most treacherous conflict-ridden interiors of Colombia to protest against the civil war and negotiate with the guerillas. Throwing themselves into peace processes with enormous courage and determination, women in politics, through their often unseen and unsung work, are bringing peace to many troubled countries.

These women are warriors… When she falls, a warrior is able to get up and continue. A warrior is she who would choose non-violent paths rather than less complex ways of dealing with others like dismissing them, alienating them, and make them disappear. A warrior is when she, in difficult/oppressive environments, can make her voice heard.

Let me go back to this old Scottish quote – ‘Men are natural warriors, but a woman in battle is truly blood-thirsty’- and conclude: I am a warrior. I am ‘blood-thirsty’, but ‘blood’ for me means justice, equality, peace, liberty of thought and expression. And the tools I use are caring, loving, educating, writing, engaging through arts and online/offline dialogue platforms.