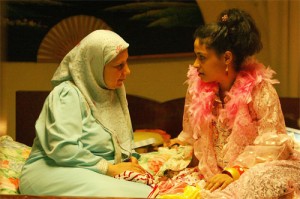 In comparison to neighboring Middle-Eastern countries, Lebanon is often regarded as a haven for moral and sexual liberty. The bubbly, alcohol-soaked nightlife and its inevitable share of wild, uninhibited party girls are endlessly flaunted through the Facebook posts of proud Lebanese and praised by astonished foreigners who have had their preconceptions of the Arab world challenged. And indeed, we Lebanese have the privilege of living in an Arab country where the youth can unapologetically go out, dance, drink alcohol, and have its share of fun. And yes, gorgeous-looking, over-sexualized actresses singers and models have come to epitomize Lebanese feminine beauty in the eyes of the world. One should not imply, however, that young women are given a positive, open outlook on their sexuality, and one should certainly not consider them to be sexually liberated. Even for Lebanese girls coming from the mini-skirt-wearing, party-going bourgeoisie, making peace with one’s sexuality is a struggle.

I am well aware that all across the Arab world, our sisters are fighting against the darkest, most horrific face of patriarchy: being harassed, threatened, locked up, beaten, excised, forbidden to have a car, a career or a bank account. But just because sexism is less visible in some areas of Lebanon doesn’t mean it is not there. And I find this benevolent sexism to be the most obvious in the downgrading way young girls are taught to deal with their sexuality. Bad advice can come from the mother who wants to put you through college and who wants to see you become a doctor one day, from the aunt who buys you short dresses and tight jeans, from the friend who you confide into. It is sugar-coated with love and empathy, and it even takes on the face of empowerment and support.

Girls are taught that their virginity is the most precious gift God has endowed them with, that it should be preserved from greedy boys who can’t wait to cruelly snatch it away from them. That’s why the precious hymen is only to be yielded in exchange of some serious compensation: a wedding ring, offered by a man with a situation who can financially support her till death do them apart. That is how we teach our daughters to treat their own bodies like mere merchandise that they can strategically give away to the highest bidder, and that’s how we teach them to deny themselves any pleasure that can arise from sexuality.

Girls are taught that once they are “opened”, their market value will plummet, and that no self-respecting man will ever want to marry them. That’s how we rush our girls into abusive marriages, making them believe that self-respecting men are the men who consider them as property, wanting their wives to be “unspoiled goods”, for them to “open” and use up.

Girls are taught that once they have sex, they will get overly attached to the person they have had sex with, and never be able to leave them. This is how we encourage our girls to consider themselves as weak, emotional creatures, incapable of free-will and governed by their hormones.
Girls are warned that once they “give themselves” to boys, boys will run away from them, having taken the only thing they have been after all along. With this self-fulfilling prophecy, we tell boys that it’s okay to act like jerks, to disrespect girls and to disregard feelings and relationships. As for girls, we tell them that when they have sex, they give, abandon and lose, instead of learn, experience and grow.
Girls are told that if they have sex with one boy, they will have sex with every other boy in town, that the rumors concerning them will spread, and that they will forever be considered whores. We back up our argument by pointing out various “bitches”, “whores” and “sluts” in our neighborhood, thus planting the seeds of slut shaming and internalized misogyny.

Young people are told that sex is an open-door to unwanted pregnancies and sexually transmitted diseases when a simple talk about birth control and protection goes a long way. With no basic knowledge of birth control, young people engage in risky behavior. Parents’ cowardice is responsible for unwanted pregnancies and sexually transmitted disease.

Girls are taught that above all, the hymen must remain intact, and this is why girls engage in risky sexual behavior, unaware of the implications and consequences, considering themselves “virgins” as long as they avoid genital penetration, when in truth virginity is a social construct that has very little to do with biology. Girls are denied any open, honest discussion about sex, learning about it only through the porn-infested media and the pressure of their equally unaware peers, thus accepting and mimicking a highly degrading portrayal of women’s sexuality.

All of this misogynistic advice can be given by women and men who love their daughters, sisters, cousins or nieces, and who undoubtedly think they deserve freedom, a job and college education. And don’t get me wrong, it is wonderful news that Lebanese people want to put both their sons and daughters through college, that they encourage girls to get jobs and that they let them go out at night and travel alone. However, it seems to me that as long as we keep treating women’s sexuality in such archaic terms, we are only superficially progressive and liberated. And there is no partying or clubbing in the world that could change that.