More than two hundred thousand migrant workers and approximately five percent of Lebanon’s population – most of them women from the Philippines, Sri Lanka and Ethiopia – work in Lebanese households. This type of employment is called domestic work and includes many tasks in private homes such as cooking, cleaning, laundry, caring for children or elderly in the houses and running errands. They represent a large fraction of the workforce however they do not benefit from the same rights as other workers such as factory workers or local shop assistants.

The Lebanese Labour Laws established in 1946, still states until today in article 7 that domestic workers employed in private households are excluded from these laws. The laws include appropriate work conditions for employees such as minimum wage, maximum working hours, holiday or sick pay and the right for an unfairly treated employee to file a complaint to the ministry of labour. Most don’t even get a day off and if they do they are usually not allowed to leave their employers house. Human rights are defined by the United Nations as rights that are essential to all human beings, whatever their nationality, place of residence, sex, ethnic origin, colour, religion or any other status. It is more than obvious that human rights are not respected in Lebanon, and one example out of many is the improper treatment of migrant domestic workers.

The employees usually travel to Lebanon hoping to find a profitable job due to the economic and social pressures in their own country as well as the lack of education. They have little knowledge of the work conditions, their rights or the migration process, which results in mistreatment by the agencies that are sending these workers as well as their employer. Migrant domestic workers are vulnerable to abuse because of forced labour in private households, lack of legal protection and due to the fact that they are living in a foreign country where most of the time they do not speak the language. Many are forced to work and some employers forbid them from leaving the house while confiscating their passports and using violence or threats to control them and force them to work long hours with usually little pay or food.

The sponsorship system in Lebanon is what’s keeping the employees so imprisoned because it means that their immigrant status in the country is dependent on them working for a single employer who is legally responsible for them. As a result the majority of domestic workers live with their employers leaving them victims of human rights abuse. A survey (2010) with Lebanese employers of migrant domestic workers showed that 88% believed that the employer has the right to confiscate their passport, 31% of employers lock their domestic worker in the house when they go out and 80% do not allow their employee to leave the house on his or her day off. These numbers are shocking and should really open people’s eyes, no matter the nationality these employees are people and no Lebanese citizen should think that they are better than them or that they should be treated in a superior way.

Many employees have also reported experiencing physical, mental and sexual abuse; they were not receiving their salary and felt very restricted in their employer’s house. A female Nepali domestic worker was interviewed in Lebanon in 2010 and these were her exact words “ I did not even get enough food. Sometimes I only had bread and tea. I worked all day, with only bread and tea. One day, I asked for my full salary and I told madam not to send me to work at the houses of her friends and relatives, and I said that if you don’t give me my salary I will not work at all. After saying this, I was beaten right away. She even used shoes to beat me. My right hand was broken and there were bruises all over my body.” That is an example of pure slavery and it is one of the major causes of suicides for the poor employees having to deal with these conditions. According to a report by Human rights Watch, migrant domestic workers in Lebanon are dying at a rate of more than one person per week. Many of the deaths are suicides, most of the rest are accidental deaths caused by workers falling from high buildings while attempting to run away form abusive employers. In 2008 Human Rights Watch reported that in just that year at least 95 migrant domestic died in Lebanon. Of these deaths 40 were classified as suicide, 24 caused by workers falling from high buildings, often trying to escape their employers and only 14 died because of disease of health issues.

The absence of protection of these workers has resulted in countries banning their nationals to travel to Lebanon for labour. Ethiopia officially bans citizens from coming to work in Lebanon, and migrant Philippines are permitted to travel legally only when they are earning a salary of at least 400$ US per month. Currently the set rate is 200$ US for Philippines, 100$ US for Africans and 150$ US for Sri Lankan workers monthly.  I don’t know where to begin because there are so many things wrong with this logic, for one they are extremely underpaid and secondly it is ridiculous that they receive their salary according to their nationality. Everyone should be getting equal rights, Lebanese or not.

I personally did not grow up in Lebanon, and to see the amount of racism in this country is unbelievable. I’m not saying that in North America there is no racism, but at least everyone has the same rights. In Lebanon migrant workers are practically slaves while abroad immigrants are getting an education and becoming employed like the rest of the citizens. For example, it’s normal to see doctors that originated from India overseas, or whites, Asians, and blacks all getting along however in Lebanon it’s very rare. I hardly see a Lebanese that associates with different races in a friendly manner, it’s very uncommon and you notice that people tend to stare if you do.

Here’s an summary of an article that I read that really disgusted me, I will never understand how humans can treat other beings in such a way:

On March 14th 2012, a poor Ethiopian woman committed suicide after she was seen being beaten and dragged by men in Lebanon outside the Ethiopian consulate. Her abuse was caught on film and shows her shouting “No, No, No.” and struggling to resist the men dragging her and forcing her into a car as many just stood and watched. Alem was the woman’s name, she was married and a mother of two children, she had only been in Lebanon for two months and arrived illegally since her country (Ethiopia) bans her to come work in Lebanon.

Finally to conclude, I passed around this mini survey to a couple students around the university just to see the overall mentality of some of the students. I only asked 10 students, so results could vary greatly with a larger student count. 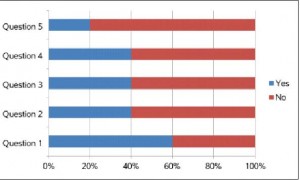