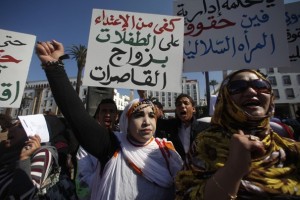 My name is Fatiha, I am Moroccan, and I am a big fan of this blog and your work. A source of inspiration and hope for women in the Middle East and North Africa.

My story is a ‘regular’ one in this part of the world, being discriminated at all levels, especially in my workplace and in my family.  My sisters and I are not allowed to do whatever we want, we do not own our bodies and most of the time our minds, and surely we cannot marry unless our father, the master of the house, decides who is fit for the job. Criteria I must confess summarize in the following: a ‘good match’, meaning, ‘a man with money and power’, or the passage from slavery in house A to another form of slavery in house B. Yes I am a victim, of my father, of my mother’s silence, of society, of an entire rotten and unjust system.

However, I heard this motto once and it gave me hope: “It is better to light a candle than to curse the darkness”. Don’t get me wrong, i will not stop cursing the darkness, but this is the first year I see the light – of freedom and justice, or the possibility of this light. First by discovering that so many women are suffering – physical violence, sexual trafficking, lack of education or employment, under-representation at executive levels, lack of access to sexual and reproductive health, basic human rights violations and political under-representation. Second that something have to change. Third that this change cannot occur on its own but I, and other women, with stamina, integrity, curiosity, courage, generosity, humility and perseverance, can make it happen.

Too often, women cannot make their own decisions about their life and their voices are silenced. Marginalization and exclusion harm us all, our generation and the future generations. So it is incumbent on all of us, women first with our untapped potential, and men too, to ask what kind of countries and societies will our children inherit? What kind of world will their children be born into? How will they lead the next generation? The promotion of peace and human rights are fundamental to our future and to our collective well-being.

Let me close with words pronounced long ago by Eleanor Roosevelt:

“Freedom makes a huge requirement of every human being. With freedom comes responsibility. You gain strength, courage and confidence by every experience in which you really stop to look fear in the face. You are able to say to yourself, “I have lived through this horror. I can take the next thing that comes along”.

Image: 2012 Women’s International Day – Women in Morocco gathered to protest the death of a 16 year-old girl who took her life after being forced to marry her rapist.

A law that allowed rapists to dodge jail by marrying their victims has been changed in the Moroccan Parliament following a campaign by NGOs. Previously, the law stated that anyone who “abducted or deceives a minor” could face a prison sentence under article 475, but a second clause of the article specified that when the victim marries the perpetrator, “he can no longer be prosecuted, except by persons empowered to demand the annulment of the marriage – and then only after the annulment has been proclaimed”.