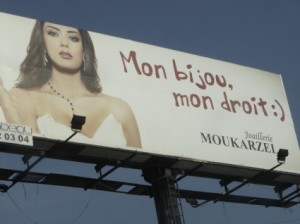 Ita��s cute when brands do a a�?For Hima�? and a�?For Hera�? ideas. This, though, becomes the focus of everybody around the holidays, any holiday, and could easily get out of line.

In the traffic jam of Mount Lebanon and Beirut, drivers listen to music and look out their window. Ads all over the highway promote home appliances for her and electronics for him. The woman obviously should go back to her a�?naturala�? place while the man can have fun in his spare time playing games and watching movies. These images have been forcefully fed to me, and many others, daily while being stuck on the road. This type of ad slims down womena��s roles in society, and sums it up in one big trunk: a housekeeper. Dona��t get me wrong; there is nothing wrong with being a housekeeper. But, why is that the a�?besta�? way we can describe the life of a big number of women in Lebanese households?

Even I have to admit, this seems very trivial compared to a�?BICa�? pens made a�?For Hera�?. It comes in both pink and purple, both favorites among women. So, for countless years, women have been using the wrong pen? Ita��s a pen! Does this magical pen write differently? Do shopping lists or letters need a special pen with an elegant and unique feminine style? And if a woman is writing down something variant from what a�?naturea�? has intended, will this pen stop working? What happens when a man picks it up by mistake? Does he lose his masculinity? Or would the pen give out and disappear from between his fingers? This is one of the worstA�advertisingA�I have seen. To think how a respectable company could come up with such an idea is just absurd. What did their marketing team do exactly?

Okay, there are many products specific to men, and other products specific to women: shampoos, perfumes, body lotions, hair products, shaving kit, etc. The reason for this difference is obvious; different makes ups, different needs and hence different outcomes. But, how does a womana��s hand compare to a mana��s? Leta��s see; both have five fingers, therea��s the palm, the hand is connected to the wrist, and it is all linked to the brain. Did women, while men were too busy writing with their manly pens, lose a finger or gain one? Perhaps women have extra functions in their hands. Perhaps the hand is not linked to the brain, so, women need a pen, specially made to suit their needs to be able to function a�?normallya�?.

I honestly believed that with time we would be less sexist in ads. I was obviously mistaken. What Ia��m hoping for is that shedding some light on the subject can help shift the dynamic in favor of freedom and expressionism without the use of women as a sex symbol nor as a dumb version of men.