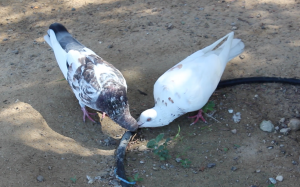 You’re flipping through channels on TV and you find yourself watching a commercial where a woman is at a job interview. She does not get the job. Two weeks later, after using a whitening cream that made her six shades lighter, she goes back for the same interview. This time, she gets the job.

The ideology that white is better has been adopted by many societies around the world. Many are under the impression that their success in personal and professional matters is determined by their skin tone.

Joan Abdallah, Master of Social Work and expert in psychology, finds it saddening that whitening creams are in such high demand. “I think it goes back [to] the feeling that there are more opportunities for white people than there are for people with darker skin. The lighter the shade goes the more the gates of opportunities, marriage, and attractiveness open up. I definitely think there’s this huge stigma attached to it and whitening creams contribute to it completely.”

“Everyday I see patients who are having this problem,” says Dr. Fatma Mohamed Mostafa, Senior Consultant in Dermatology at University Hospital Sharjah. “They come for better glow, and in this area, better glow means whiter skin.”

A walk through the beauty product aisles of Carrefour would expose the true horror: walls upon walls of whitening creams. With names such as “white radiance” and “flawless white,” companies like Pond’s and Olay are promoting the perception that whiter skin is superior.

And this doesn’t come cheap. Creams such as Vichy’s Bi-White cost 158 AED while La Roche-Posay’s Sensi White costs 235 AED. However, cheaper brands such as Olay’s White Radiance set you back about 60 AED, which is still pricey.

According to Global Industry Analysts (GIA) Report in 2013, “the global market for skin lighteners is projected to reach $19.8 billion by 2018 primarily in Asia, Africa, and the Middle East. GIA says that growth in this market is forecast to be driven by strong demand in region[s] where fair skin is associated with youth, beauty, and prosperity.” According to TheGazelle.org, the sales of skin whitening creams in India totaled 258 tons in 2012. The research agency, AC Nielsen, estimates that the market will increase at nearly 18% per year.

As stated in BBC, “the World Health Organization has reported that Nigerians are the highest users of such products: 77% of Nigerian women use the products on a regular basis. They are followed by Togo with 59%; South Africa with 35%; and Mali at 25%.”

Although there are no specific statistics concerning the Middle Eastern market for whitening products, CosmeticsDesign-Asia.com reveals that “the strong economic growth, rising standards of living, expanding base of middle class population, increase per capita spend[ing] on beauty and wellness products, and growing discrimination based on color or skin tone are key factors driving [the market’s] growth.”

“Here in the gulf there are a lot of people with dark skin and they look for whitening products,” explains Hamza Bensaid, Senior DTC Manager of Procter & GAMBLE. “A good 60% to 80% of the people are asking for whitening creams. So for us it makes a lot of sense to make a campaign which is about whitening.”

“In P&G the global business units are the ones who are supposed to design these ideas. They work with creative agencies and brainstorm together to come up with these ideas. It depends on customer insight, [which] is basically market research; they bring consumers to the office, they ask them questions. ‘What makes you buy the product?’ ‘What are the needs?’ Then [P&G] produces samples, brings the consumers again, and asks which product [they] think [they] would buy. And then we get the results,” says Bensaid.

Dr. Pamela Chrabieh, Professor of Women and Gender studies at AUD, believes marketing employees capitalize on consumer insecurities. “It’s a market,”  clarifies Dr. Chrabieh. “They have enough experts to know what the weaknesses are in this region, but not only in this region, in Africa and in other places. They target these weaknesses.”

As if it wasn’t enough that companies prey on consumers by emphasizing their weaknesses, whitening creams also have an amalgam of side effects.

According to LiveStrong.com, the presence of clobetasol propionate, a strong steroid, in some over-the-counter whitening creams, causes skin thinning, which can lead to severe bruising, exposed capillaries, and stretch marks. Steroids in these creams also lead to clogged pores, which can cause increased acne. Whitening cream users can develop leucoderma, a condition in which skin stops producing melanin. When this happens, the skin turns pink and the only treatments are skin-grafts or ultraviolet light treatments. Also, frequent use can cause ochronosis, which are dark patches that are difficult to remove.

The Food and Drug Administration (FDA) banned mercury for use in whitening creams in the United States because it can cause both kidney and neurological damage. Mercury helps lighten the skin by stopping the production of melanin.  A study conducted by the Chicago Tribune sent 50 creams to be assessed at a lab; six of these creams contained mercury. According to LiveStrong.com, in 2013 the FDA issued a warning for people to be cautious when using whitening creams.

Dr. Mostafa says that skin lightening treatments can be used “under the instructions of a dermatologist, not on your own. However, It could have a negative effect if it was abused.”

Theories explaining the whitening phenomenon include the impact of colonialism, specifically the desire to look like the colonizers. Regardless of the fact that the era of colonization is over, the perception that white is synonymous with power and beauty was left behind.

Dr. Chrabieh believes that whitening cream use is a result of Eurocentric beauty standards.“Whether it’s in the United States or outside, for instance in Western [and] Eastern Asia; it’s all the same. [It’s] this never ending colonial mentality that was transmitted through the colonialist to the colonized and their descendants. So many women are using whitening creams to be closer to these ‘perfect standards.’” 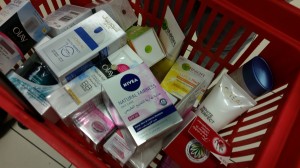 Ermida Koduah, a 20-year-old student, believes we can trace the desire to be white back to slavery.“I’m from Ghana and I’ve heard that the lighter-skinned you were the more accepted you were; you got to be the house slave [or] the master’s favorite. The darker-skinned people had to work on the field.”

Many people from different backgrounds have been directly affected by the toxic ideology that they should strive to be white.

Omnia Fahim, a 20-year-old student, cites her Egyptian background as her greatest influence to use whitening creams. “ I like to look whiter. I have been using Fair and Lovely for three years and it [has] had a huge effect on my skin. [They] offer [women] the chance to feel better by being whiter if they don’t like their skin tone.”

Elaf Patel, a 21-year-old student, believes her Indian heritage values girls with whiter skin. “I am more towards fair, but I do feel like if I were darker it would be a whole other conversation. They’re so hard to get away from. If they are just laying around, my mom will be like ‘do you wanna use it’ and I would say ‘okay.’  It doesn’t bother me the way it bothers some people. If I want to go out and buy whitening creams, I want to have that option.”

The pressure to be white did not come from a vacuum; it was passed down by elders to their children.

Mohammed Zerari, a 21-year-old student, clarifies that this ideology of white supremacy is not new in our society.“It dates back to older generations, and the fact that they keep telling their kids that white is the best color. My mom grew up in Algeria and Algerians have always used creams and natural remedies to maintain their skin. I  see it in my household; my mother and sisters, my aunts, my cousins, all of them are crazy about keeping their skin as white as it can be.”

Zakiya Akbar, an 83-year-old grandmother, encourages her children and grandchildren to stay out of the sun. “I was very white when i was young, and my children are very white. But now, one of my sons has become really dark and I keep telling him to put turmeric paste on and stay out of the sun. I also keep telling my granddaughters that in Pakistan everyone finds white women more suitable because they are better looking.”

“The first question I asked after I had just given birth to my daughter was, ‘Is she white?’” admits Sara El Maghraby, a 34-year-old stay at home mother. “I know that in Egypt my daughter won’t be considered beautiful unless she’s white. I know it sounds bad but this is our life.”

Whitening creams are not only for women. Select brands, such as Nivea and Fair and Handsome, manufacture creams that promise maximum fairness to men.

“I don’t think there is any pressure on the male community in this part of the world when it comes to being white. However, for the women its a struggle, they need to constantly keep their skin as white as possible,” says Zerari.

Whitening creams are not only the byproduct of societal perceptions, but they also affect women internally. They contribute negatively to women’s self-perception and ultimately their self-esteem.

“Even if there are women who say that they feel better when they use the creams, ultimately the whitening creams don’t contribute to empower women,” explains Dr. Chrabieh. “It tells women that they are not good as they look like now so they always have to enhance this aspect.”

“Whitening creams exploit  the insecurities of people, not just women,” expresses 21-year-old Jackie Chee of whitening creams when it comes to his Chinese-Filipino heritage. “They exploit their insecurities for money and what could be false promises. They make people feel the need to change themselves to reach the standards of ‘beauty’ as taught by media.”

However, distributors of these controversial creams don’t seem to agree with this notion.

“No, it’s not asking women to change at all, it’s not makeup” assures Bensaid. “What whitening creams do is they reduce the amount of melanin in the skin, and therefore make your skin look whiter. It doesn’t really change it, it just makes your face look smoother, lighter, also more beautiful by the way. It’s just that the way we position it in the ad is different, because women here, when they go to the shops, are there for whitening creams and that’s the way that it is.”

The overwhelmingly large whitening cream industry doesn’t contribute positively to society because it encourages discrimination. Our society’s pressures to look a certain way, mixed with our own self-doubt, is only fueled by advertisements and marketing campaigns urging people that white is equivalent to power and beauty. These ideals are not a recent phenomenon and this expanding market will continue to affect generations to come where companies make copious amounts of money off of individuals by exploiting their insecurities.
—————————————————-

This article was selected and read by the MBRSC Advisory Board members due to its level of effort and true journalistic nature. Along with other projects, this article was recognized for being one of the best projects produced by AUD students in the Spring 2015 semester.