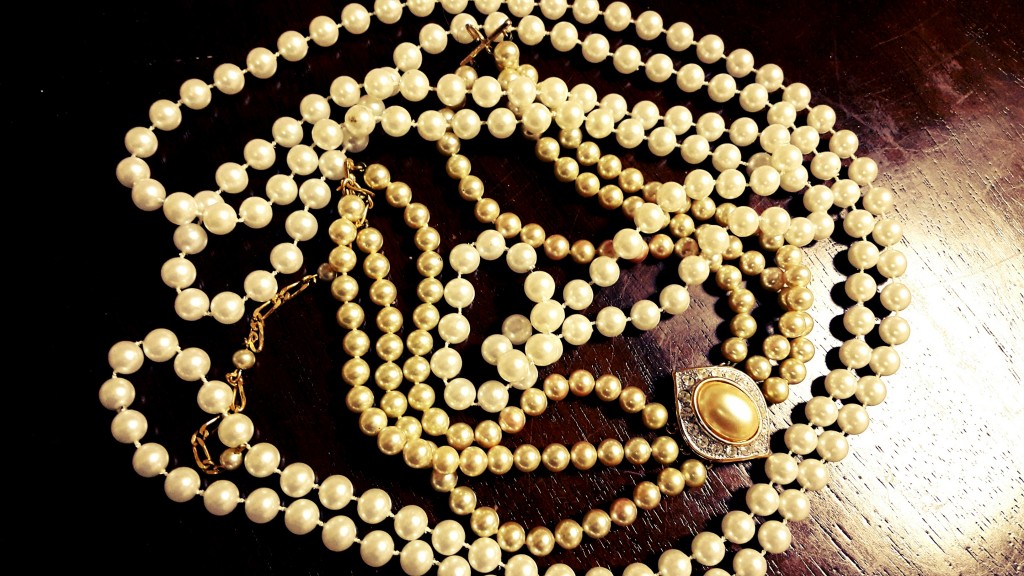 I was interviewed few hours ago for a documentary and one of the directors’ questions was about my pearls. My answer had nothing to do with eclectic styles mixing and matching old and new, luxury and humbleness, ‘East’ and ‘West’, or the importance of filling one’s neck with necklaces that strike me fancy. Even if I am an artist and value fashion as a form of art, I am far from being a fashionista, and I certainly am not trying to incarnate Johannes Vermeer’s Dutch woman with a pearl necklace.

My pearls belonged to Alice, my beloved grandmother who passed away few months ago…

Birth and death are the only certainties for all humans, and every culture has had customs and rituals associated with burials and with the mourning of family and friends. Between yesterday’s lecture about Zoroastrian dakhmehs where the dead are left on the top of a tower to decompose in order not to contaminate the living, and today’s interview when I reasserted my belief in the necessity and possibility of continuity, of an afterlife connected with this life, I realized that my grandmother’s pearls, Alice’s pearls, do tell one of the many stories of the universal experiences of inheritance, legacy, women’s memory and the power of objects to bind and unbind human beings.

Psychoanalysts from Freud up to the present have defined the goal of mourning as the detachment of libidinal ties from the deceased love object. The ego thus becomes free of its former attachments and ready to attach to a new, living person. Nevertheless, both clinical and empirical evidence call into question the ‘detachment’ aspect of the theory (Rubin, Klass and Nickman, Shuchter…) and propose that an ongoing internal relationship to mourning objects is an important aspect of a ‘successful’ mourning.

In other words, mourning is seen “as a process of inner transformation that affects both the image of the self and of the object. It involves not the breaking of an object tie, but the transformation of that attachment into a sustaining internal presence, which operates as an ongoing component in the individual’s internal world” (1).

Some scholars would argue that mourning objects function to preserve and celebrate the ‘departed’ body, or that these objects are important because they define our existence, or that they have an embodied presence – they act as material substitutes for an absent body.

My grandmother’s pearls are definitely a visceral trace of her that reminds me of the fact that people die only when we forget them; a material imprint of her physical absence and intangible presence; and more, they remind me of the necessity of reassessing my picture of the world and my place in it, of restoring possibilities in my life – the passionate sense of the potential that keeps me going -, of “making what happened incomplete and completing what never was” (2).

(1) John E. Baker, Mourning and the Transformation of Object Relationships Evidence for the Persistence of Internal Attachments.