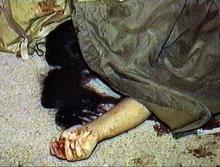 A question I have been asking for years , especially when I hear of women being publicly humiliated or murdered when caught in extra-marital relations or having sexual intercourse without being married, whereas men are generally ‘heroes’, or are easily forgiven for their acts – men are seen ‘naturally’ polygamous.

Men and women are treated equally in most sections of the Lebanese criminal and penal codes, with the exception of laws that address adultery, violence against women in the name of “honor,” abortion, rape, and prostitution. However, why a supposed violation of a marriage contract (which is in the personal status law) is in the penal code? Why is there inequality (men versus women) in defining the conditions and consequences of adultery?

Articles 487-489 punish a woman who commits adultery with a prison sentence from three months to two years. She is found guilty if the act takes place inside or outside her home. A man committing adultery, however, has to be caught in the act in his own home or be known by others to be conducting an illicit affair to be sentenced to prison for one month to a year. A woman is required to have the testimony of witnesses to prove her innocence, whereas a man can be proven innocent based on lack of material evidence, such as incriminating letters or documents.

Even if few adultery cases are actually handled in the courts, adultery is seen as a ‘moral crime’, a ‘religious crime’, a ‘social crime’, etc., especially in the case of women, to the extent of murdering the woman in the name of family ‘honor’. Fortunately, on August 4th , 2011, Lebanon repealed article 562 of the criminal code that permits mitigation of ‘honor’ crimes such as the killing or injury of a wife, daughter or other relative to protect the family ‘honor’. Through this previous article, the State condoned acts of violence against women who were considered to be ‘misbehaving’. It specified that any person who ‘surprised’ his spouse or a relative in the act of adultery or a same-sex relationship and kills or injures the other party without premeditation, may have their prison sentence shortened. Always applied on women…

A paradox: In Lebanon, domestic violence is not specifically covered by the penal code. A draft law to criminalize domestic abuse was passed by the Lebanese cabinet in May 2010 and was rejected a while ago. Article 252 of the Lebanese Penal Code still allows for sentence mitigation for crimes committed in a state of rage. Certainly it could be said that ‘honor’ crimes, as were depicted under Article 562, are crimes that are committed in a state of rage and thus criminals could still benefit from reduced sentences. This legal framework is problematic as it is impossible to abolish a law that takes account of the state of rage of the individual who commits the crime and still maintain a distinction between pre-meditated murder and second-degree murder.

Also, forced sex is inadequately defined in Lebanese law. The definition of rape explicitly excludes forced sex in marriage, and the rape of a virgin by means of deception is potentially subject only to a fine (article 518). If a rapist marries his victim following the crime, the law exonerates him (article 522). Similar legal provisions pardoning an alleged rapist if he marries his victim exist in countries like Bahrain, Iraq, Libya, Syria, and the Occupied Palestinian Territories. The majority of countries in the region also do not criminalize marital rape.

“Provisions that criminalize consensual sex between adults and that fail to criminalize forced sex fall short of international standards, which require the elimination, prevention, and punishment of all gender-based violence, including marital rape and domestic violence. In 2008, the CEDAW Committee, the United Nations expert body that supervises implementation of the Convention on the Elimination of All Forms of Violence against Women, called upon Lebanon to enact legislation on violence against women, including domestic abuse and marital rape”.

Remark: Lebanon ratified this Convention in 1997, with reservations on Articles 9 (equal rights for men and women in citizenship and nationality), 16 (elimination of discrimination against women in matters of family and marriage) and 29.

First, conditions and consequences for adultery should be equal for men and women. Second, adultery shouldn’t be criminalized in the penal code; it shouldn’t be a matter of the State, nor of religious tribunals, nor of family (parents, uncles, aunts, cousins…). Although it causes a lot of harm to the spouse, the consequences – whether divorce, negotiations or forgiveness – should be left to the privacy of the couple.

International human rights law requires decriminalization of consensual adult sexual relationships to protect the rights to physical autonomy, health, and privacy. Furthermore, international law forbids laws that discriminate based on gender, in this case providing more severe punishments for women for the same alleged offense. Therefore, as a matter of human rights, consensual sexual relationships between adults should never be criminalized. Lebanon’s penal code provisions on adultery not only discriminate against women, they violate the rights of men and women alike.