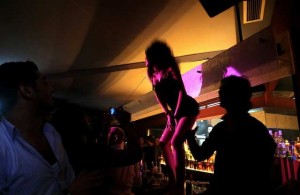 Sex trafficking is considered to be part of human trafficking or modern-day slavery. Up to 27 million people are living in slavery around the world: women and men, girls and boys, and their stories remind us of the kind of inhumane treatment we are capable of as human beings. In 2012, Lebanon was among the Tier 2 Watch List (refer to UNHCR report), a country described as “source and destination for women and children who are subjected to forced labor and sex trafficking”, a transit point for Eastern European women and children subjected to trafficking in other Middle Eastern countries.

The government’s “artiste” visa program facilitates the entry of women on three-month visas to work as “dancers” in Lebanon’s adult entertainment industry. In 2011, 6024 women entered the country under this visa program.

“Some Syrian women in street prostitution may be forced to engage in prostitution, and Syrian girls are reportedly brought to Lebanon for the purpose of prostitution, including through the guise of early marriage. Anecdotal information indicates that Lebanese children are victims of forced labor within the country, particularly in street begging as well as commercial sexual exploitation facilitated by male pimps, husbands, and “boyfriends,” and at times through early marriage. Small numbers of Lebanese girls may be taken to other Arab countries for exploitation in prostitution”.

“The Government of Lebanon does not fully comply with the minimum standards for the elimination of trafficking; however, it is making significant efforts to do so. During the reporting period, the government enacted an anti-trafficking law, implemented awareness campaigns for foreign workers, increased investigations into allegations of abuse, and referred an increased number of victims for assistance. The government made combating human trafficking a national priority and demonstrated concerted efforts to educate the public on human trafficking. The government failed to show substantial progress in identifying foreign or Lebanese victims of trafficking –particularly victims of domestic servitude and commercial sexual exploitation – and allocated minimal resources to protecting victims. The government also failed to bring specific charges of forced labor or forced prostitution in cases involving abuses against migrant workers and did not assign adequate punishment to deter such crimes”.

“There is no evidence that a sex trafficking case has ever been prosecuted in Lebanon, and the government has yet to prosecute a case of forced labor using the existing forced labor statutes in Lebanon’s penal code. Pursuit of such cases appeared to have been hampered by bureaucratic indifference and inefficiency, limited coordination between relevant ministries, court backlogs, and a lack of sufficient anti-trafficking training among police and judges, as well as cultural biases, particularly against foreign domestic workers. Given the significant hurdles to pursuing criminal complaints in the Lebanese court system and victims’ lack of adequate legal representation and knowledge of their rights, many foreign victims opted for quick administrative settlements followed by repatriation. Evidence suggests, however, that many cases were not resolved, and trafficking victims were deported without receiving their due wages”.

According to the United Nations Office on Drugs and Crime report (2008), it remains very difficult to assess the gravity of the phenomenon partly because the crime of trafficking remains hidden and few cases are reported, the report said: “Victims are afraid to speak out, dreading retribution or stigmatization. Many simply do not know their rights. Silence perpetuates the cycle of exploitation”.
Another major obstacle in identifying and helping victims is the absence of laws explicitly criminalizing trafficking. Only about 60 cases of human trafficking are officially identified every year in Lebanon, which, according to the report, does not reflect the reality of the situation in the country.

Women and children are the key target group, because of their marginalization, limited economic resources and predominance in the “invisible” formal sector. According to Barry, Kathleen (The Prostitution of Sexuality, 1995: New York University Press, pg. 1), prostitution is normalized and women are perceived more and more as commodities that can be purchased. Barry claims that “sexual exploitation objectifies women by reducing them to sex. Barry also states that the theory of posing women as products to be used for sexual purposes, originates from society, thus a “public condition” and furthermore, it is a consequence of patriarchy. Hence, women are subjugated because society is dominated by male power and the society differentiates between men and women.

Furthermore, Barry speaks of sexual exploitation in all aspects, as rape, pornography, and also trafficking. She believes it is important not to divide the concepts, in order to give a proper image of the extent of the problem of sexual exploitation. When studying trafficking and prostitution it becomes clear that within this trade, women are considered without value, they are expendable.

“People must be aware and make others aware that human beings cannot be purchased; they are not items with price tags. Even more, people are free and must not be held against their will to perform exhaustive tasks in humiliation with no material return. As the American Writer and Nobel Prize Winner Pearl S. Buck once said, “None who have always been free can understand the terrible fascinating power of the hope of freedom to those who are not free”. For the sake of humanity and in order to at least halt the inclination of trafficking in persons, each individual must have a sense of ownership towards this case that affects us all; the society as a whole is accountable of spreading the awareness necessary to inform the world of this crime and mobilize people to stop it” (Human Trafficking and Economic Globalization. Sex Trafficking in Women – The Contemporary Slavery. By Rasha Jammal)

Expert on Trafficking in Persons Ends Visit to Lebanon
Sigma Huda, Special Rapporteur of the United Nations Commission on Human Rights on trafficking in persons, especially women and children, statement to media, September 15, 2005

In the course of my mission, I have found that a significant number of human beings, women in the majority, are trafficked into and within Lebanon. Unfortunately, their plight seems to remain unknown to significant parts of Lebanese society, perhaps because the victims tend to be foreign nationals or are considered to be of low social status. Lebanon’s victims of trafficking are often invisible victims because they suffer in places that remain hidden to the public eye such as private homes or hotel rooms.

Image source: A woman dances on the bar of a Beirut nightclub. Credit: Marwan Naamani/AFP/Getty Images