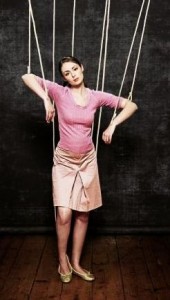 Who can honestly say that he-she never manipulated someone else in his-her life and/or has never been manipulated?

Etymologically, manipulation (from ‘manipulation’ in French and ultimately from ‘manipulus’ in Latin) refer to: treating or operating with or as if with the hands or by mechanical means (but this is not the content i am pointing at in this post); managing or utilizing skillfully (closer…); controlling or playing upon by artful, unfair or insidious means especially to one’s own advantage/purpose (bingo!!!). It is about wanting to have power and controlling – politically, economically, in a couple, in a family, in a community… Either physically or/and emotionally-psychologically…

Humanity is marked by manipulation at all levels. For some, it allows humans to survive and the most manipulative is the fittest/strongest. For others, it is an abomination. In fact, it is part of our human condition and it has both negative and positive impacts – but what is positive for me is negative for others and vice-versa!

Most of us have engaged in some sort of covertly aggressive behavior from time to time. Periodically trying to manipulate a person or a situation doesn’t make someone a covert-aggressive personality. Personality can be defined by the way a person habitually perceives, relates to and interacts with others and the world at large. The tactics of deceit, manipulation and control are a steady diet for covert-aggressive personality. It’s the way they prefer to deal with others and to get the things they want in life.

How is it possible to spot manipulators and what can you do about it? Here are few tips:

1- You make a statement and it will be turned around – so there is no use in trying to be honest but don’t capitulate and don’t accept an apology that feels untrue.

2- A manipulator will almost always agree to help but change his mind constantly. So, if he says yes, make him accountable for it. Do not buy into the sighs and subtleties, or leave him to his theater.

3- A manipulator says one thing and later assures you he did not say it: if you find yourself for example in a relationship where you figure you should start keeping a log of what’s been said because you are beginning to question your own sanity, you are experiencing emotional manipulation. So a manipulator is an expert in turning things around, rationalizing, justifying, and explaining things away, so persuasively that you begin to doubt your very senses. The solution: RUN! AVOID! Or carry a pad of papers and a pen and start making notations during conversations to record his words for posterity’s sake!

4- A manipulator is an excellent guilt monger! He can make you feel guilty for speaking up or not speaking up, for being emotional or not being emotional enough, for giving and caring, or for not giving and caring enough, etc. Most of us are pretty conditioned to do whatever is necessary to reduce our feelings of guilt. Also, a manipulator uses ‘sympathy’: he is a ‘great victim’. So, again: RUN! AVOID! BE INDIFFERENT! Or try to make a point of not fighting other people’s battles or doing their dirty work for them.

5- A manipulator does not deal with things directly. He will talk around behind your back and eventually put others in the position of telling you what he would not say himself. He is passive aggressive, meaning he finds subtle ways of letting you know he is not happy.

6- If you have a headache, a manipulator will have a brain tumor! No matter what your situation is, the manipulator has probably been there or is there now but only ten times worse. So a manipulator has a way or de-railing the conversation and putting the spotlight back on himself. And if it happens that you call him on his behavior, he will become deeply wounded and claim it is you who are always in the spotlight. Don’t bother proving the contrary. Trust your gut and walk away!

7- No sense of accountability! No responsibility for himself or his behavior. It is always about what everyone else has ‘done to him’.

Obviously, it is difficult to label directly a person ‘a manipulator’. It takes time and conscious effort. A manipulator’s aggression is not always obvious. Our gut may tell us that they’re fighting for something, struggling to overcome us, gain power, or have their way, and we find ourselves unconsciously on the defensive. But because we can’t point to clear, objective evidence they’re aggressive, we can’t readily validate our feelings.

All of us have weaknesses and insecurities that a clever manipulator might exploit. Sometimes, we’re aware of these weaknesses and how someone might use them to take advantage of us. For example, I hear parents say things like: ” I know I have a big guilt button.” – But at the time their manipulative child is busily pushing that button, they can easily forget what’s really going on. Besides, sometimes we’re unaware of our biggest vulnerabilities. Manipulators often know us better than we know ourselves. They know what buttons to push, when and how hard. Our lack of self-knowledge sets us up to be exploited. What our gut tells us a manipulator is like, challenges everything we’ve been taught to believe about human nature. We’ve been inundated with a psychology that has us seeing everybody, at least to some degree, as afraid, insecure or “hung-up.” So, while our gut tells us we’re dealing with a ruthless conniver, our head tells us they must be really frightened or wounded “underneath.” What’s more, most of us generally hate to think of ourselves as callous and insensitive people. We hesitate to make harsh or seemingly negative judgments about others. We want to give them the benefit of the doubt and assume they don’t really harbor the malevolent intentions we suspect. We’re more apt to doubt and blame ourselves for daring to believe what our gut tells us about our manipulator’s character.

BOOSTING YOUR SELF-ESTEEM; GETTING TO KNOW YOURSELF AND OTHERS BETTER; RECOGNIZING THAT THE MANIPULATOR IS NOT USING DEFENSIVE TACTICS BUT OFFENSIVE ONES IN ORDER TO MAINTAIN POSITION, GAIN POWER AND TO REMOVE ANY OBSTACLE; PRACTICE THE ‘INDIFFERENT’ MINDSET AND POSITION; AVOID CONVERSATIONS OR REDUCE THOSE TO THE MINIMUM, etc.

This article was published in April 2012.