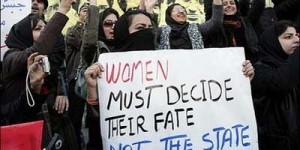 I am an Egyptian woman who has a story to tell about the aftermath of what was called the Arab Spring Revolutions. Forgive me if I use a nickname. I have been participating to many demonstrations in the Tahrir Square since Mr. Mohamed Morsi was elected as President. My main concern was – and still is – to stop the Constitutional reforms concerning the application of the Sharia. I believed that after the uprising things had changed for women in Egypt. I felt safe in the square. I thought there was no harassment. I was mistaken. I saw with my own eyes security forces beating and sexually assaulting friends and colleagues of mine. The state subjected them to humiliating ‘virginity tests’. Gangs of men are preying on young women.

I am pursuing my fight for equal rights between all Egyptians, but the ‘Witch Hunt’ is a major obstacle. As women, we found ourselves driven from the public space – this is why online spaces are a safe heaven. The revolution has also pushed us further out of the political arena. Even if I try to stay optimistic, I do not foresee a future for me in this country, especially when the three main principles of the revolution will not be achieved: bread, freedom and social justice. Every day I go to work, I fear of being harshly criticized by a fanatic man or a woman wearing a hijab. Egypt has become far more conservative and strict than before.

True that the Sharia can be interpreted in many different ways. Saudi Arabia prohibits women from driving a car, while Pakistan had a woman leading the country. However, in the case of Egypt today, it will most probably be used to reinforce negative social attitudes towards women and impose restrictions on their freedoms.

We, as liberal Egyptian women, are being forced to silence. We are waiting for the unknown…