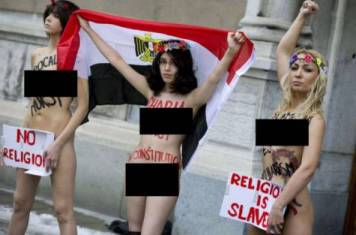 October 2011: a young nineteen-year-old Egyptian woman blogs a naked picture of herself. What could have been but a mundane act in the west was about to stir a passionate debate around feminism religion and nudity in the Arab world. Two years later, after having been harassed, threatened and kidnapped in her home country, Aliaa el Mahdy the naked blogger has now sought political asylum in Sweden, where she is cut-off from other Arabic secular activists.

Apart from the predictable fury of the conservative Muslims, the most baffling reaction to Aliaa el Mahdy’s bold act was most Arab feminists’ reluctance to endorse it. Aliaa el Mahdy was accused of causing an unnecessary controversy and of actually harming the causes of women and secularism by further maddening the patriarchal oppressors and religious extremists. And indeed, why stir anger and hatred by posting provocative pictures that might hurt the religious feelings of the pious and the honorable while a constructive discussion in favor of women’s right can only take place in a unified, pacified society? Aliaa el Mahdy was further disgraced in the eyes of Arab feminists when she participated in a naked protest against Morsi’s constitution in December 2012, alongside two activists from the Ukrainian group Femen. In an Al-Akhbar article, Sara M Salem argues that Aliaa has sided with a neo-colonial feminism that patronizingly intends to teach muslim women how to be free by getting rid of their religious traditions and cultural heritage. Even the unapologetic atheist Joumana Haddad condemns the methods of naked protest by stating that they are but another patriarchal objectification of the female body. And indeed, should we be afraid of Aliaa el Mahdy?

Before tackling the thorny question of cultural relativism as far as women’s rights are concerned, one simple statement comes to mind: Aliaa el Mahdy has faced death threats, harassment and kidnapping for committing the crime of showing her naked body to the world. Somehow, something about el Mahdy’s exposed body has been interpreted as a tremendous threat to patriarchal society. Specially that this kind of naked protest -including that of the Ukrainian group Femen- is not intended to be erotic, or to lure male desire: in other words, the female body is not presented as an object of desire from a male’s perspective but in a neutral matter-of-fact perspective: this is what a woman’s body looks like. Not only did Aliaa el Mahdy break the taboo of nudity, she also countered the tyranny of the male gaze that constantly strives to enclose the female body in one of two categories: either a desirable object to lust upon or a shameful object to hide under heavy sheets. This change of perspective is, in my opinion, what was the most scandalous in Aliaa el Mahdy’s act.  The punishment faced for breaking this taboo has been widely disproportional.  This tells us about a society that has become so controlled by machismo that it is unwilling to acknowledge a naked female body.

One might argue that in an oriental society, gender equality can be achieved through  a different path: that of religion and traditions. While it might be true that a veiled woman can be a free woman, in a society that considers a woman’s body sinful, no woman is free. Beyond cultural relativism, the first step towards human rights is the acknowledgement of the individual: refusing to see women’s bodies is refusing to acknowledge them. This is why Aliaa el Mahdy’s initiative is so relevant in the Middle-Eastern context. Before worrying about neo-colonial feminism threatening to take over oriental culture, Arab feminists should worry about the traditional structures of a culture that forces them to remain hidden, except in circumstances when their bodies are highly eroticized -as we can see in Lebanon, for instance, where pictures of half-naked lascivious pop stars and belly dancers are bombarded at us, but where nudity is still considered chocking, and the female body sinful.

In this regard, the criticism of veiling is not an excess of a westernized and colonial feminism, but a rightful examination of the sexist structures of a society that compels women to keep their bodies -and sometimes their faces- hidden.