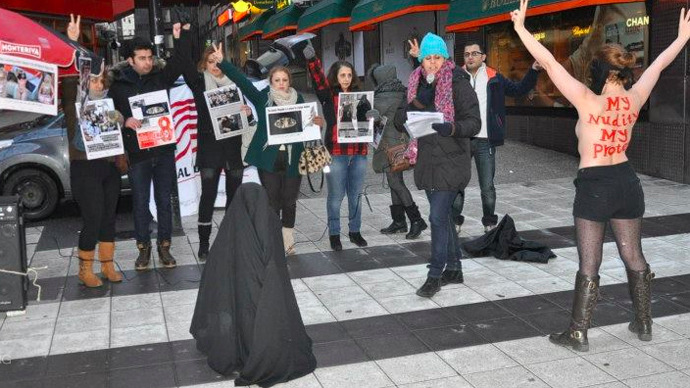 With the article on Red Lips High Heels about the Egyptian activist and her affiliation with the FEMEN group came a lot of prolonged thoughts and debates. What is FEMEN?

FEMEN is a feminist group, in Kiev, known for its topless protests. Theya��ve taken part in protests against religious institutions, international marriage agencies, sexism, sex tourists and many other topics. It was founded in 2008 by Anna Hutsol; its members are mostly female with the exception of few male ones. There are 20 core organizers in FEMEN, as well as hundreds of activists and thousands of supporters. FEMEN activists have been regularly detained and fined by the police in reason of hooliganism and disrespect to state symbols.

In a nutshell, FEMEN is a feminist group. It opposes the prohibition of abortion, the existence of religious institutions as it seems them to oppress women, and, it opposes the legalization of prostitution in Ukraine. It fights for womena��s rights, has political intentions, social goals, and FEMEN activists believe this is doable my protesting topless, and in specific cases completely nude.

The debate about FEMENa��s approach on feminist subjects is long and exhausting. Some people see that they are helping objectify women by protesting topless, hence drawing attention to the body and taking it away from the real cause. These people argue that sexual freedom and the freedom of doing as one pleases with her body dona��t need to be flaunted. It is believed that by showing their bodies these women are reducing the importance of the topics of protest and drawing the eye of the passers to the body alone. In addition, these activists are only adding salt to the wound, by depicting women as sexual objects and giving the police a reason to detain them, which keeps the cause of the protests in the shadows and only sheds light on the fact that nude protests, hooliganism and destruction of state symbols are offences to be fined for.

On a different matter, I dona��t understand why FEMEN stands against the legalization of prostitution. If I were to ask for womena��s rights, I would like to protect all women. Women working in the sex industry are the most bullied, abused, discriminated against and treated poorly. And the reason is one and the same: these women are working illegally, they have no means to go and file a complaint against anybody or even an unknown for theft, so this gives predators an easy chance to abuse these women and get away with it. With the legalization of the industry will come basic rights, basic rights that all women are fighting to reach. It is the oppressed that tends to oppress as well, and this is one example of the case.

At the end, FEMEN seems to be an extremist feminist group that wants to break social barriers by erasing cultural differences. The story of the hijab is a fine example of that. The issue with extremists is that they always come in pair, and when each party is stuck to their opinion so fiercely, being extreme is what stops the world from moving forward. You cana��t have a reasonable debate with an extremist, so imagine two extremists facing each other at a round table. What can really be achieved?