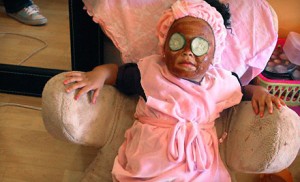 Miserable, unsatisfied, ill-disciplined, demanding, despotic and useless… Rude to their parents and other adults, acting bossy and refusing to share with other children, prone to excessive self-absorption, lack of self-control, anxiety and depression… Yet they get extravagant birthdays, Prada purses, Tiffany jewelry, designer clothes, etc. I am certain of the fact that many mothers – and fathers – won’t agree with my post, but I think it is time to tackle this phenomenon, especially within Lebanese upper social classes.  If you give kids so much early on, they get to a point where they can’t be satisfied with anything.

According to many experts in the fields of sociology and psychology, a parent’s job is primary to prepare children for how the world really works. In the real world, you don’t always get what you want. You will be better able to deal with that as an adult if you’ve experienced it as a child. Also, if your parent/child relationship is based on material goods, your child won’t have the chance to experience unconditional love. Emotions can’t be healed by a trip to the mall. Happiness and one’s own status aren’t or shouldn’t be defined as a function of what children and teens wear or drive – but their intelligence, creativity, caring, giving, work ethic, etc. Row models shouldn’t be people who never did anything except spend money they got from somebody else.

Along with the imperial offspring of the Ming dynasty, the dauphins of pre-Revolutionary France and contemporary American kids from certain families, there are Lebanese kids – and Middle Eastern – who represent the most indulged people, not just that they’ve been given unprecedented amount of stuff – clothes, toys, cameras, skis, computers, televisions, cell phones, PlayStations, iPods, SPA TREATMENTS!! (the market for Burberry Baby and other forms of kiddie “couture” has reportedly been growing by ten per cent a year!); they’ve also been granted unprecedented authority.

“The notion that we may be raising a generation of kids who can’t, or at least won’t, tie their own shoes has given rise to a new genre of parenting books. Their titles tend to be either dolorous (“The Price of Privilege”) or downright hostile (“The Narcissism Epidemic,” “Mean Moms Rule,” “A Nation of Wimps”). The books are less how-to guides than how-not-to’s: how not to give in to your toddler, how not to intervene whenever your teen-ager looks bored, how not to spend two hundred thousand dollars on tuition only to find your twenty-something graduate back at home, drinking all your beer”.