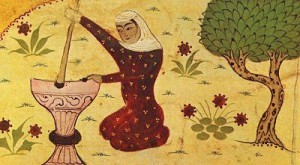 Women’s spiritual experience has been suppressed through much of modern history – considering the historical credence given to the masculine perspective of the divine over the earthier, fleshy, relationship-centered perspective of the feminine – and is only now been recovered in its full richness: Julian of Norwich, England, the Ashanti women of Ghana, Lady Kasa of Japan, Rabia Al-Adawiyya, Isadora Duncan, Virginia Woolf, Pema Chödrön, Sharon Olds, Amy Tan, etc.

The luminous presence of women who follow the Sufi Way—the mystical path of Islam—is brought to life in many books – check for example Muslim Women Mystics for Margaret Smith – through their sacred songs and poetry, their dreams and visions, and stories of their efforts as they witness the Truth in many realms. These writings reflect the honor and respect for the feminine in the Sufi worldview, and they are shared in the spirit of inspiration and hope for the flourishing contributions of women to the spiritual development of humanity.

Because Sufism sheds hierarchical and social distinctions in favor of a total consummation with the Beloved (Allah), women have always held an important position. Rabia Al-Adawiyya or Rabia of Basra or Rabia Al-Basri was an eighth-century saint about whom many legends were composed, along with the ninth-century healer Lady Nafisa, who was renowned for her Qur’anic knowledge and whose tomb is still a sacred destination for spiritual pilgrims of many religious traditions.

Rabia was born to a poor family in Basra in what is now Iraq. Her parents died of famine and she was eventually sold into slavery. The story is told that her master one night woke up and saw a light shining above her head while she was praying. Stunned, he freed her the next morning. Rabia chose a solitary life of prayer, living much of her life in desert seclusion.  As her twelfth-century biographer, Attar, wrote, “She was set apart in the seclusion of holiness.”  She needed nothing because she had everything, and she refused to marry, even when a suitor promised her wealth.  She replied that material riches bring only anxiety and sadness, while the life of surrender brings peace.

According to Charles Upton: “The bulk of the Rabi’a material as we know it comes from stories of her interactions with those who came to challenge or learn from her. Uncompromising and single-minded in her devotion to the highest spiritual realization, she belittled miracles that apparently happened around her, the fear of hell, and the desire for paradise. Sometimes even well-known spiritual figures, like Hasan of Basra, could be the butt of her sharper wit, deeper wisdom, and greater spiritual power. To place Rabi’a in perspective we might compare her to another great Sufi figure and one of the greatest spiritual writers of all time – Rumi. First, she stands some five hundred years earlier, close to the beginnings of Sufi poetry as we know it. If Rumi is the Ocean, Rabi’a is the Well. If Rumi has sheer ecstatic energy and compacted multidimensional meanings, Rabi’a has virgin clarity and undistracted focus. Along with the taste of wine, she carries the taste of water – a precious substance when you live, as Rabi’a did, in the desert of God” (Doorkeeper of the Heart: Versions of Rabi A)

“I have made You the Companion of my heart.
But my body is available to those who desire its company,
And my body is friendly toward its guest,
But the Beloved of my heart is the guest of my soul.”

“My peace is in solitude but my Beloved is always with me. Whenever I witness His Beauty He is my prayer niche (mihrab); toward Him is my qibla. Oh Healer of souls, the heart feeds upon its desire and its striving towards Union with You has healed my soul. You are my Joy and my Life to Eternity. You were the Source of my life; from You came my ecstasy. I have separated myself from all created beings, for my hope is for Union with You; for that is the Goal of my searching.”

The sole object of Rabia’s life was bound up in her yearning and passionate love (shawq) for her Beloved, which meant not merely the destruction of her self (nafs) but surrender to Allah every moment in the perfect Union in which there is no Lord and slave, no Creator and created being, only He in Himself. In that state she came to realize that she existed in Him without any possibility of separation from His indivisible Oneness.