Let me start by saying that as a Middle Eastern 22-year-old I always take a bit of pride being from a country that is more liberated and open than its counterparts. Some name(d) it the Switzerland of the Middle East, others the Paris of the Middle East. Well, for me, Lebanon is just Lebanon. I reckon that all Western countries have liberals and conservatives, Lebanon is no Western country, but it does not fit into the stereotype of conservative Arab countries. The harsh reality is that Lebanon is both, ita��s very sad when a country is considered more open because women can work, drive, wear whatever they want and where a�?Honour killinga�? is illegal (yet some still think ita��s OK to kill in the name of a�?honoura��). But the fact is that a law to protect women from domestic violence is non-existing due to the Oh so many religious sects weighing in on the issue, another harsh fact is that Lebanese women have no right to give their nationality to their children which directly makes them second class citizens.

This brief introduction is for those who are not familiar with the complexity of this tiny Eastern Mediterranean country.

What brought me to write this article is the a�?scandala�� (as reported by the media) of Lebanese Olympic contestant Jackie Chamoun. Oh dear Jackie what have you done? How could you a�?ruin the image of Lebanona�� like that?
See folks, a video was leaked, dating back three years, it is the making of a Ski calendar photo-shoot including Jackie and other professional athletes. (Jackie pictured below) 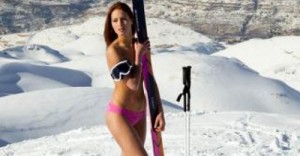 Since it was the video that was leaked, naturally more was seen than the picture above. Jackie apologized on her Facebook page, I thought she shouldna��t, but she did maybe to calm this whole fiasco down. What I have to state on this issue is that to each their own opinion about nudity or half naked pictures. Some consider it disgusting, sexualizing women, others consider it art (the difference between nude and naked), beauty and freedom. Now concerning the subject of sexualizing women, it is quite common and I do criticize it, however, these types of sports calendars/Olympic contestants/posing are not new. I remember when the London Summer Olympics ended, plenty of Olympic contestants/winners (both male and female) posed for these types of calendars. Whether one thinks it is necessary or not, it is a matter of opinion.

Jackie got a lot of support through social media. And no, not a�?all those who defended her are willing to do the samea�? like plenty of not-so-supporters pointed out, it is a matter of freedom of choice, and shea��s free to show off her body, if some Lebanese do not accept to be represented by a�?someone who stripped naked for a shoota�� then take a look at the parliament/government, Ia��m pretty sure youa��ll have your hands full by criticizing a�?representativesa��.

What I thought was unacceptable was to compare Jackie to the lowest of those who consider themselves a�?singersa�� and a�?artistsa�� (and not worth making them more famous by mentioning their names) who became a�?famousa�� by stripping down and all they have shown is barely there outfits and have no talent and voice. Jackie is a talented athlete. Qualifying to the Olympics takes hard work and determination, if some never heard of her until now, well, ita��s a pity, and whata��s more pitiful is that this young lady along with Alexander Mohbat are representing us in an international sports event but all some people care about is the fact that she showed some skin!

Pity when a woman showing some skin sparks more outrage than women beaten to death by their husbands (a tribute to Roula Yaacoub and Manal El Assi).

When Lebanon is drowning in corruption(S), economic problems, political problems (hint: the country is politically divided, parliament extended for itself, a resigned government, no border control, influx of Syrian refugees, not to mention the almighty a�?Lebanesea�� fighting in Syria)…

Did I mention the maniacs planting bombs and blowing themselves up on our soil?

Never mind all that! Jackiea��s pics are the REAL scandal! Again and again: Oh dear Jackie what have you done? You ruined us.

At least thata��s what some of our media channels think and what a�?caretakera�? Minister of Youth and Sport Faisal Karameh thinks since he asked for an a�?investigationa��. Oh but the minister was not so eager to be the boss when the International Basketball Federation (FIBA) suspended the Lebanese Basketball Federation from competing. The problem? Politics and sectarianism (yes even in basketball). And how can one forget football? Lebanese were extremely excited when Lebanon had a chance to qualify for the FIFA world cup. Long story short: Lebanon lost to Qatar and later it turned out that many Lebanese footballers were bribed to deliberately lose games, those footballers were fined and banned for life, but it was the Asian Football Confederation which investigated the case and not the Ministry of Youth and Sport. Speaking of youth, what has the boss done regarding the unemployment, (just to name one of the difficulties the young generation is facing)? Nothing, rien, nada, nichts, niente!

But no, these topics are not as urgent as Jackiea��s photos!

Well, the International Olympic Law respects the personal freedom of athletes and Jackie will compete. A huge cheer to our Jackie Chamoun and Alexander Mohbat representing us in Sochi, both of you made us proud (with or without any medals). 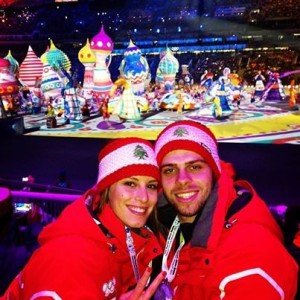