I took 3 different photographs of my sister in which she resembles 3 different women. I made sure all 3 pictures are exactly the same, in terms of makeup and lighting, and focused on dark makeup on her eyes and eyebrows, for a deeper intensity. The first picture depicts my sister with her long flowy hair, dark makeup, and a black turtle neck, the second picture, I put her in traditional hijab/veil, with exactly the same setting, and the third and last picture, she was in Niqab.

My initial plan, was to paint 3 pictures of different women in the same way that are tied up with ropes, to show their distress. However, I realized, that to really express what I am trying to say, I would need to get someone in the same position I am in, and who better than my sister. So, I decided to take the pictures and paint them later on, but I faced another problem, trying to show her emotions exactly through drawing. And so finally, I decided I would use the three photograph as they are, with every detail perfectly shown, and too later sketch out and paint on the ropes, on the printed photographs.
My original influence, came from an artist I stumbled upon on Facebook, her name is Mona Ragab, and she is a university student in Egypt (fine arts). Her picture was so inspiring, and made me really think about what it’s like for women in countries like Egypt, who basically have no right at all. I complain about some of my rights here, but living in Egypt, or any of the other Middle Eastern countries, is much worse than modern Dubai. This is the original photo:

However, after much thought, especially with recent events, I was a bit annoyed, at the order of the photo. I am not veiled, so I am considered to be in the same category of the last picture on the right, but this isn’t how I view our society. Taking in consideration, that she lives in Egypt, and is veiled, I can understand what she was trying to portray. Her message, was that women in Niqab, are tied down by society, the veiled women is not as tied down, but still has major restrictions, whereas, women who are not veiled, have no restrictions whatsoever, as shown by the painting. I honestly don’t think, I would have given this painting too much thought, if I saw it 4 years ago, because it wouldn’t have dawned on me that non veiled women could be judged to a level that I have witnessed. The other picture that put most of my thoughts in perspective was this one down below.
I also stumbled upon this picture, on Facebook as well, posted along with a small Arabic poem. I have tried over, and over again, to find the reference for this picture, but sadly had no luck. I would love to meet the person behind this idea, because whoever they are, they managed to explain the story of my life, in just one picture. Looking at both the photograph, and the painting above together, changed everything for me, and allowed everything to fall in to motion. It really deconstructs a lot of stereotypes in just one photo, and moreover, shows a perfect example of “don’t judge a book by its cover” 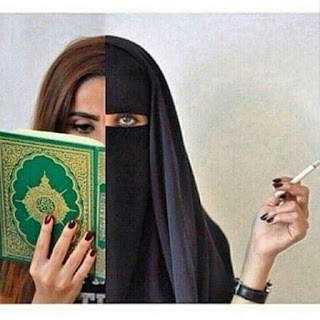 A photographer named Sebastian Farmborough, once shot a picture of a niqabi veiled woman coming out the sea, here in Dubai. The girl was an Afghani friend of mine, and was very keen on being able to take photos like this especially because of her background. Sebastian, was born in the UK, and lived for 3 years in Saudi Arabia, and then moved to Dubai, after his short time in the Middles East, he started a theme of photos that he called “An Emerging Mystery” in which he shot niqabi veiled women in settings, they would not usually be seen in. He did this, to prove that Islam, and women in Islam, are severely understood, and he wanted to change that. 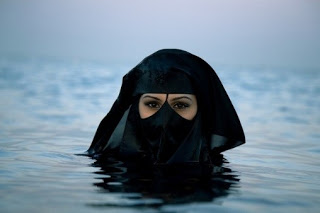