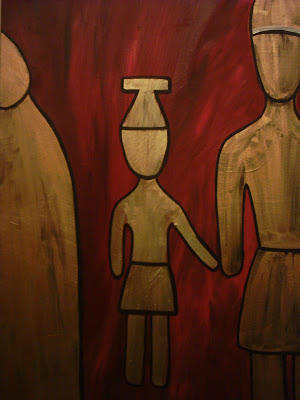 I thought of it a while ago while reading fairy tales to my five year old daughter. Wolves, witches, monsters, princes and princesses living happily ever after, having 10 kids and more… I found myself twisting theses stories in order to be closer to our reality and context: 21st century C.E., Lebanon (Western Asia). Old stories with themes and images like child abuse in Hansel and Gretel, horror in little red riding hood and sexist as the villains are usually females in Cinderella, Snow White, etc… These tales encourage passivity in young women and make them more likely to fall in love with the wrong guys, endure mistreatment, abuse, etc.

These tales were not originally meant for children at all. They used to be entertainment for peasants, often at evening gatherings. They were the television and pornography of the day, the life-lightening trash of preliterate peoples. Of course, in those days, little distinction was made between adults and children. There was no notion of child innocence or the need to keep certain things away from young ears. Even when the French instilled morals in newly conceived nursery tots, the dark roots of the tales were never entirely expunged. What about the 1001 Arabian Nights?

Fairy tales share a common logic: a hero’s journey in quest for a treasure – often a woman. We all have the same characters crop up in our dreams and stories (the hero, the old sage, the damsel, the trickster…) – refer to Jung’s theory of archetypes and global unconsciousness – because we all face the same issues and have the same urges and desires. The hero’s journey then comes from a universal truth and reflects the story that we all go through. In theory then these fairy tales which stick so closely to the hero’s journey should be a healthy thing to expose children to – a universal metaphor for the way their life is going to turn out and for the journey that they should feel a pull to embark on. It should encourage them to dream of leaving home and having grand adventures and of growing and meeting new friends. However these stories are also very old, so now less relevant and even damaging. “Fairy tales are important historically because they provide children with information about a certain period. What they don’t do is provide positive images about groups who are not white, middle-class or heterosexual”.

I am particularly concerned with the bad influence on women, whose roles are less liberated in most fairy tales, and who always seem to wait for their saviors – prince charming or a knight in shining armor. Today though things are different – even in Lebanon where you may find families expecting women to have the same hero’s journey as men, to live life as they choose and pursue a career and go traveling and do all the other things that men do -, out-dated views should be deconstructed. For example, the conventional image of the princess – of being slim and beautiful and attracting men from around the world – like sleeping beauty, Belle, Helen of Troy…and cartoon versions of these princesses. Looks aren’t the most important feature. Also, what about that fairy tales are often far removed from reality? Many women end up waiting out for their man that fits the image of Prince Charming and who will rescue them, whereas the reality is often a beer/arak/narguile-guzzling sports fan. Furthermore, what happens after the ‘hero’ and the ‘princess’ ride off into the horizon??? And, let us not forget about nightmares…

According to Liz Grauerholz , associate professor of sociology at Western Illinois University:

[quote style=”boxed”]”Hearing these messages that were created by an old, patriarchal society may cause women, especially young girls, to withdraw from activities or careers, such as competitive sports or hard labor, because it is not part of being feminine. This continued emphasis on beauty is a way society controls girls and women. Women adopt behaviors that reflect and reinforce their relative powerlessness, which can lead to limiting a woman’s personal freedom, power and control.”[/quote]

The point of this post is not to conclude that fairy tales are ‘bad’ for children, but to point out few negative impacts. Being aware of our kids’ sensitivities is a good thing; exposing them to the realities of the world through reading constructive stories is better than keeping them in a padded cell until they are teenagers. Fairy tales encourage imagination and creative thinking. They are a form of escapism and they are part of popular culture and literature. Just make sure you expose them to other ideas too. I know i am trying to do it… The objective is not to be overprotective, nor to say that romance is bad, as long as expectations do not exceed common sense. Still, what is common sense?