The following image has been published on Facebook in the last two days, representing a Bershka skull T-Shirt, followed by massive online protests by Lebanese – mostly Christians. Comments like ‘This is humiliating’, ‘a shame’, ‘this is crazy’, ‘people are evil’, etc. accompany the image depicting, as all are stating, the Virgin Mary as the Lady of Skulls! 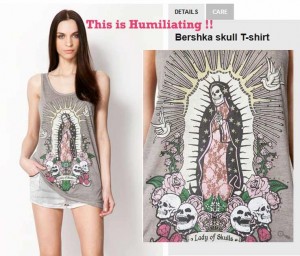 In fact, this Bershka image could either be a blend between Mexican Santa Muerte and Lady of Guadalupe, or simply Santa Muerte.

Santa Muerte or Saint Death, is a sacred figure and feminine skeletal folk saint venerated primarily in Mexico and the United States. As a figure made holy by popular belief, the saint of death developed through syncretism between Mesoamerican indigenous and Spanish Catholic beliefs and practices. Since the pre-Columbian era Mexican culture has maintained a certain reverence towards death, which can be seen in the widespread commemoration of the syncretic Day of the Dead. Elements of that celebration include the use of skeletons to remind people of their mortality. 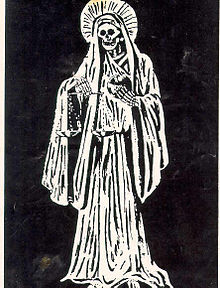 Where Santa Muerte comes from isn’t clear, but a parallel can be drawn to La Parca, a feminine form of the Grim Reaper whom the Spaniards who evangelized Latin America used in their imagery. She was likely combined with Mictecacihuatl, the Aztec goddess of death who along with her husband Mictlantecuhtli, ruled over the underworld, Mictlan. Like the Bony Lady, the deathly couple was traditionally represented as human skeletons or carnal bodies with skulls for heads. Aztecs believed that those who died of natural causes ended up in Mictlan, and they also invoked the gods’ supernatural powers for earthly causes. With its persecution of indigenous religion, the Spanish Conquest drove this devotion underground and into syncretism with Catholicism. Spanish clergy employed the Grim Reapress in didactic fashion among the indigenous peoples of the Americas. Drawing on traditions of sacred ancestral bones and interpreting Christianity through their own cultural lens, some indigenous groups took the church’s skeletal figure of death for a saint in its own right.

Other Latin American cultures have skeleton saints, but they are male, and generally based on real people, if only loosely – San La Muerte of Argentina and Rey (King) Pascual of Guatemala. Santa Muerte seems to be a figure of Mexican folk religion, and many of the devotions to her include invocations of Jesus, the Trinity and God the Father. Many of the prescribed novenas include traditional Catholic prayers as well, including the Our Father.

Santa Muerte has many familiar nicknames. She is known variously as the Skinny Lady, White Sister, Godmother, co-Godmother, Powerful Lady, White Girl, and Pretty Girl, among others. As godmother and sister, the saint becomes a supernatural family member, approached with the same type of intimacy Mexicans would typically accord their relatives.

Much more than an object of contemplation, the Bony Lady is a saint of action. Santa Muerte’s popularity as a folk saint also derives from her unique control over life and death. Her reputation as the most powerful and fastest acting saint is above all what attracts results-oriented believers to her altar. Most devotees perceive her as ranking higher than other saints, martyrs, and even the Virgin Mary in the celestial hierachy. Saint Death is conceived of as an archangel (of death) who only takes orders from God himself. Those familiar with Catholic theology will recognize the role of Archangel Michael, God’s angel of death who guards and judges souls, weighing their merit with a set of scales. One Mexican woman explains her devotion to Santa Muerte in this way: “I believe in God but I trust in her.” 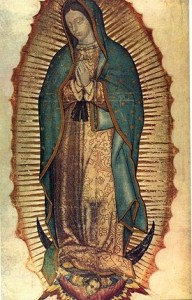 The appearance of the Lady of Guadalupe to the Aztec Indian Juan Diego in December of 1531 generated the conversion of Mexico, Central and South America to Catholicism. Indeed, the Blessed Virgin Mary entered the very life stream of Central America and became an inextricable part of Mexican life and a central figure to the history of Mexico itself. The three most important religious celebrations in Central and South America are Christmas, Easter, and December 12, the feast-day of the Lady of Guadalupe. Her appearance in the center of the American continents has contributed to the Virgin of Guadalupe being given the title “Mother of America“.

The U.S. Catholic bishops have not spoken about Santa Muerte – probably respecting freedom of thought and expression, and for political reasons (internal Mexican struggle) -, but the Mexican bishops have, condemning this worship as invalid. Still, it is firmly entrenched among Mexico’s lower working classes and various elements of society deemed as “outcasts”. It has been estimated that five million Mexicans venerate the angel of death. Santa Muerte occupies more shelf and floor space than any other saint in dozens of shops and market stalls specializing in the sale of religious and devotional items throughout Mexico. Votive candles are the best selling of all the Santa Muerte products. For the past five years the Bony Lady has been accompanying her devotees in their crossings into the United States, establishing herself along the two-thousand-mile-long border and in U.S. cities with Mexican immigrant communities. It is in border towns such as El Paso, Brownsville, and Laredo where evidence of her cult is strongest. However, devotion to Santa Muerte has spread to cities and towns deeper within the U.S., as indicated by the increasing availability of her devotional paraphernalia.

Santa Muerte’s transformation from object of occult devotion to protagonist of a public cult has involved a concomitant development in her identity. With the eruption of drug related violence in the 1990s, the black colored Santa Muerte of dark deeds stepped into the limelight as she appeared at the altars of notorious narcos. And it is the amoral Grim Reapress of the black devotional candle who continues to command media attention on both sides of the border and dominate public perception of her. Black candles, however, are slow sellers and are the least common at public altars in both Mexico and the United States. Despite her media image, Saint Death isn’t so much the guardian angel of narcos as she is the patroness of the drug war. In other words, her devotion among the police, soldiers, and prison guards on the front lines of the war against the cartels seems as widespread as it is among the traffickers.

The Bershka representation most probably represents the struggle between social/economical classes… I – and other experts in Religions such as R. Andrew Chesnut, the Bishop Walter F. Sullivan Chair in Catholic Studies and a professor of religious studies at Virginia Commonwealth University. Read “Devoted to Death: Santa Muerte, the Skeleton Saint”, Oxford University Press – don’t think that suppressing those representations is a winning strategy for the Catholic Church, especially in areas where the rise of devotion can be attributed at least in part to a lack of attention to teaching the people about their faith in the first place. One of the things that have attracted people to Santa Muerte is that death is evenhanded, coming just the same for the rich and the poor, the powerful and the weak. The Church too often in Mexico is seen as being on the side of the rich and the powerful, and Santa Muerte seems to be using her scythe to bring it down a few pegs — just as her followers believe she can do to their enemies. In some ways adherents view her as a supernatural version of themselves. One of the main attractions of folk saints is their similarities with devotees. For example, they typically share the same nationality and social class with their adherents. Indeed, many devotees are attracted by the leveling effect of Santa Muerte’s scythe, which obliterates divisions of race, class and gender. One of the most oft-repeated acclamation is that the Bony Lady “doesn’t discriminate.”

As a Sciences of Religions’ Scholar and University Professor, I urge my fellow citizens to conduct researches before judging, be less ignorant of religious symbolism and rituals in their country and around the world, and more open to religious/political diversity and freedom of expression. My goal is not to defend beliefs or practices – I don’t believe in Santa Muerte !! -, but to scientifically study religious phenomenon. I urge my students and my fellow citizens to be less judgmental and sentimental and adopt a more scientific/objective point of view, while trying to respect the reality of what seems to be ‘opposing sets of cultural values’.

I respect the diversity of opinions concerning this matter and this article shows this diversity, as well as the controversy; for I am fully aware of the urgent need in Lebanon to do more than communicating scientific and historical evidences. We need to create spaces of healthy debates and dialogue on several issues, including controversial religious issues, and to create a climate of deliberations in which no group perceives that accepting any piece of evidence is akin to betrayal of their cultural/religious group.

1375 Aztecs establish their capital at Tenochtitlan (the site of modern Mexico City). Their empire dominates central Mexico culturally and politically until 1519. The Aztec belief system includes Mictecacihuatl, the Aztec goddess of death traditionally represented as a human skeleton or carnal body with a skull for a head.

1800-1900 Virtually no mention of Santa Muerte in the traditional written historical record.

1940’s Santa Muerte reappears in documents produced by Mexican and North American anthropologists, primarily as a folk saint whose divine intervention is sought for matters of the heart.

2001 On All Saints Day, Enriqueta Romero Romero brings Santa Muerte into the open, establishing the first public shrine dedicated to the devotion in the downtown Mexico City neighborhood of Tepito.

2003 Self-declared “Archbishop” David Romo’s temple, the Traditional Holy Catholic Apostolic Church, Mex-USA is granted official recognition by the Mexican government. On August 15, the feast day of the Assumption of the Virgin Mary, the church celebrates the inclusion of Santa Muerte in its set of beliefs and practices.

2003 The Santuario Universal de Santa Muerte (Universal Sanctuary of Santa Muerte) is founded by “Professor” Santiago Guadalupe, a Mexican immigrant from the state of Veracruz.

2004 One of Romo’s disgruntled priests files a formal complaint of the church’s inclusion of the Santa Muerte in its devotional paradigm.

2005 The Mexican government strips the Traditional Holy Catholic Apostolic Church, Mex-USA of its official recognition. However, Mexican law does not require such sanctions, and the incident provoked political controversy.