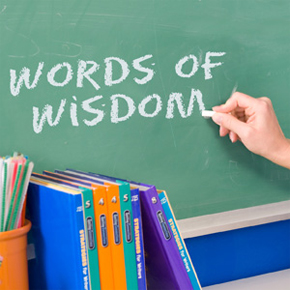 On the 9th of March, Lebanon celebrated Teachersa�� Day. During my early years, every year, I used to get my mother a small gift on that day; we were taught in school that mothers are the greatest of all teachers.

How do we feel about teachers nowadays?

For some reason, university professors arena��t counted as teachers. We have excluded them from this day for many years. A�But, dona��t they teach as well? Ita��s great that we appreciate school teachers; they are definitely underpaid and overworked. We give them classrooms of 30 students and barely enough time to get anything through their heads. We give them the responsibility to mold these brains and yet we dona��t motivate them to keep on going. If a student messes up, the parents blame the teacher and the administration will do anything to keep parents happy. This is definitely not a sample for every story we hear about teachers, but it is one of few.

On the other hand, university professors are supposed to take these students that have been educated and guide them in the direction they would like to take their careers. But through observation, Ia��ve noticed that university professors do a lot more than just that. They talk, inform and explain a lot of things outside their respective fields of work. Politics is something that comes up a lot in every classroom. History, whether national or international, comes up as well. Social constructs and etiquette are not far behind on the list. Are these things really made for the classrooms? We have students who attend universities and colleges to take a step forward in their working lives. Why are these general information not acquired through other forms? Why do they need to be force fed? Why dona��t we notice that in our country we have domestic violence before hearing the news about different women passing away because of it? Why do we only realize we have politicians that dona��t do the job they are paid for when they have already been a�?electeda�? again? Why are we blind to the fact that change is within each and every one of us? Why do we only consider it after watching a documentary about how corrupted our country is?

When we have teachers who teach with their hearts, we learn all these things. It seems, to me at least, that university classrooms have lost their standards in higher education. We have turned them into classrooms for social education. This has happened out of necessity and need, because our new generation lacks real education. No matter how much we try to do otherwise, we still see fathers cursing at politician x, and mothers cursing at religion y, and parents overall treating their girls differently than their boys. Education starts at home.