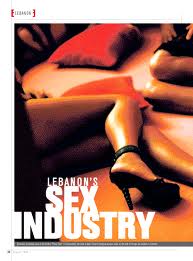 Depicting the reality in Lebanon, we have different degrees of citizenship. Men are on the higher ranks, of course with the exception of homosexual and queer men, and, women are still seen as second class citizens. And still, homosexual women who are manly are viewed with more respect than the others, because anything that is manly is better and firmer (allegedly). This is a complete gray area. Yet, this is still something we can debate with people, raise a couple of eyebrows and make them scratch their brains. But, what about sex workers? Where do they fit in this equation?

While writing this article, I did some research in the subject. a�?Sex workera�? is a term used generally as a euphemism for prostitute, but it includes a bigger aspect of the sex industry. It has become with time the politically correct term, like with any other sensitive subject. The views on the matter shift from one person to the other; from complete victimization to rather attacking and being violent to sex workers. The sad truth is that even between women themselves some are still looked down on. We have the high class women, the ones with overflowing pockets that are at the peak of the pyramid, we have the working class who tries to show they belong to the first category, we have the working class that lives to their actual capability, and we have sex workers. It seems that sex workers are at the bottom of the pyramid, for one simple reason: their job.

In some countries, sex workers are respected. Their work is legal and they have the ability to go to the police and file for a complaint in case of discrimination or abuse. And, we have countries, like Lebanon for example, where if you talk about the basic rights of sex workers you are faced with people reminding you that a�?normala�? women lack their rights and these a�?normala�? women should be our priority.

We always ask for the stories of the sex workers. We want to know why they do what they do. Did they have an option? Did they have a choice? Or are they selling these services for pure pleasure? Are these women mothers? Are they students trying to make university payments? We ask so many questions, and in answer to each and every one I ask: Does it really matter?

Women (whether mothers, businesswomen, activists, artists, writers, lawyers, heterosexual or homosexual, etc.) have no sexual rights. It makes no difference if a woman is rich or not, if she has connections or not, if she is the daughter of an MP, if she is an MP herself, women have no sexual rights. If a woman speaks out about having a sexual life she is socially frowned upon and regarded as the trash of the society. Some mothers believe that sex is a weapon their daughters should use to hook the perfect man; because a�?why would a man buy the cow if he can get the milk for free?a�?. In a society where sex is linked to dirt and shame, it seems farfetched for sex workers to be seen differently. It is hard to convince a man that a womana��s body is her own and she is free to do with it as she wishes. It is even harder to have a man understand that he is not the only creature with sexual desires, that women too have these desires and as he is free to act upon them she is no different.