One of the perks of being a female athlete is the invitation to show off, and prove that you can really do what you pretend saying. When younger cousins dare you to accomplish those deeds, it is just as important to be funny and take it lightly than to make a big deal out of it. Did I lose any of my female qualities when I lifted these men up? Did they lose any of their masculinity because they were lifted by the other weak gender? That was not the impression that I got. What issued from that morning was a lot of mutual respect and an open discussion about the possibilities that a woman can achieve once she set her mind to it, and her ability to be true to herself while doing “manly” activities. Sometimes, it is probably best to avoid confrontation with words and degrading actions.

Laughter can be one of the best ways to introduce a new concept or idea, and to open the minds to new possibilities.

And sometimes, a picture is worth a million words. 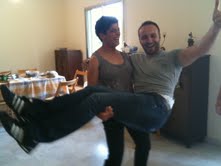 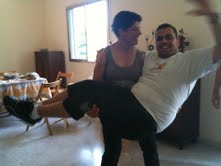