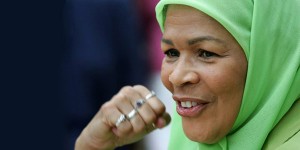 My latest encounter with a fellow Lebanese so-called feminist led to her following statement: “There are no Muslim Feminists. It is a pure contradiction. Islam oppresses women. As long as Muslim women are defending their religion, they cannot claim being feminists”.

Every discussion about “Islam” and “women” must begin with a definition of Islam. Simply stating that “Islam is peace”, “Islam is violent”, or “Islam means hijab” is insufficient, because these stock phrases beg the question of “Whose Islam?”

My Islam is the Islam of Leila Ahmad ‘Women and Gender in Islam: Historical Roots of a Modern Debate’, Asma Barlas ‘Believing Women in Islam’,  Aysha Hidayatullah ‘Feminist Edges of the Qur’an’, Fatima Mernissi ‘The Veil and the Male Elite’, etc. and Amina Wadud, the famous African-American Muslim woman who shocked most Islamic countries and communities by leading a mixed-gender Friday prayer congregation in New York on March 18, 2005, and who wrote ‘Qur’an and Woman: Rereading the Sacred Text from a Woman’s perspective’ and ‘Inside the Gender Jihad: Women’s Reform in Islam”, one of the first books I read when I was only twenty years old.

What about Feminism? There are multiple definitions. According to Dr. Wadud, Islamic Feminism says that ‘Islam belongs to all of us’, not the exclusive field of scholars and policymakers. Islam is what we all live on a daily basis.

I am Muslim and Feminist. I believe that women, as Amina Wadud did, can seek to redefine and reassess their intimate relationship with God and their identity as Muslims in relation to others – Muslim men, and people of different faiths. Wadud is a famous scholar and one of the founders in the Modern Women’s Islamic Movement. She dared to interpret the Qur’an and Islamic practices to encourage gender equality in Islam and redefine a Muslim woman’s role as more than simply for domestic purposes and child bearing. Her books opened my eyes to women’s issues in my religion and I started to see it – i.e. Islam – as liberating to women as much as it could be oppressive.

Every Lebanese woman, especially every Muslim woman, should see Amina and others like her as sheroes. I know I do. I finally understood through her that gender struggles are at the very heart of reforming Islam today and she does represent these struggles in a passionate and powerful way. According to Amina: “Patriarchy got us out of the caves but it can now be retired in favor of equality and compassion”.