How many times have we heard: a�?Ita��s got to be a woman driving that car!a�?, a�?Give her 5mins to park that cara�?, a�?Wea��re going to be here all day if we wait for her to get out of that parking spota�?, etc.

Lesson learnt: these are stereotypes.A�

Stereotypes are little pieces of reality that took the form of a generalization. They start off with an incident or two, and suddenly we start saying that an entire group of people has that set of specs. Is it possible to break down these stereotypes or are we simply adding fuel to the fire?

This is Lebanon. Here, we dona��t abide by the street lights. If the road is open, we simply drive. If our light is red and we are driving, we curse at the driver facing us who reminds us that the light is red. And if our light is green and we are faced with a driver passing a red light we curse at him because his light is red! Confusing? The majority of us just wants to get from A to B with the least of traffic and minimum time, regardless if we break a law or two, or are rude and disrespectful to anyone. How can we be blamed? We are doing the impossible to make as much money as possible to be able to enjoy a couple of nights out in the month, with the inflation and the never-getting-better salaries…

But, when we teach our sons at a young age to drive while we dona��t do the same with girls, we feed this stereotype. Driving isna��t that hard; it has a couple of tricks and thata��s about it. With practice, awareness and turning all your senses on, you can get the hang of it. Some people have these senses hyped. Some people are fast to react; they notice things faster and make quick judgment and they take less time to figure out what to do in case of accidents. These people are confident and firm, and they know they can handle themselves behind the wheel. These people can be men and women. This is not genetic of course. Ita��s not in onea��s chromosomes or hormones. Like anything else it can be worked on and improved over the years.

When kids are growing up, boys look up to their dads while girls to their moms. There are a lot of houses where women have a strong stance; those girls grow up to be stronger than ones whose moms are occupied with material things. Ita��s not wrong to be either. Diversity is the key to life. But, we need to raise our kids equally. Girls need to know that ita��s okay if they want to take career paths less frequented by girls, and boys need to know that there is no shame in pursuing careers that are dominated by female presence.

A�Back to the driving lesson, so what if a woman couldna��t park her car in ideal time? Have you not seen men fail at fitting a small car in a spot that could fit two? So what if she drove safely and turned her blinkers on when making a left or right? How many men have accidents because they dona��t do this? And so what if she didna��t drive at 120km/h? Remember the number of drunken youngsters wea��ve lost due to speeding and crashing into walls? 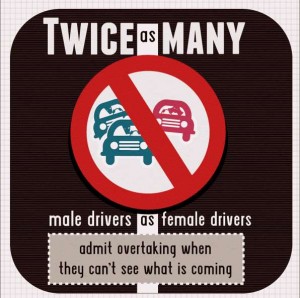