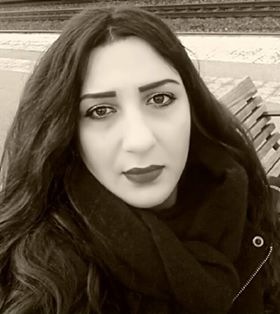 A girl growing up trying to fit in but fails miserably, lost between two cultures…

I was born in a land of war, killing and bombing. I remember all the windows we had to change because the glass broke when the bombs fell outside like rain. Many of our neighbors soon stopped changing the glass but I remember that my father changed them EVERY time. He didn’t want his family to have nylon as windows. I remember that we often ran down to the basement to get cover from the storm of bombs outside. I remember that when I left to school in the morning I never knew if my parents or siblings or relatives would be alive when I went back home. Every day was a miracle when we all survived and were home, altogether as a family. We were lucky, other families weren’t. Many died during my first years growing up in Lebanon.

So, my father wanted to save us. I am sure he didn’t plan that his daughter would see a child with a head split in the middle for falling down from the balcony because of a bomb. I saw that my father didn’t want his daughter to see her relatives taken away by soldiers for months for questioning and coming back home all covered in blood from all the beating. I saw that too. So, my father made a promise to us, to move us to a safer country, and he did, one beautiful Saturday, to Sweden.

It was 1984, I was 6 1/2 years old when we moved to Sweden, and after living a whole year in a camp to wait for the residency, my family and I moved to our first home in this country in 1985.

It was a town where we were the only foreign family and my sister, my brother and I were the only students in school with dark hair. The Swedish kids made fun of me and called me names and for the next couple of years I was struggling to make myself accepted. I cried very often. I just wanted to go back and I asked my father many times why he took us away from the country where I felt like home, Lebanon.

It wasn’t only hard for us as kids, this was a hard time for my parents as well, a new country and children that no longer could speak the mother tongue right. We spoke a new language that they didn’t understand. They had no control over the situation – my parents began to, as they call it, save us from the “Swedish world”. They didn’t want us to change, but it was hard for us, my siblings and I. I was trying to be accepted at school and my parents tried to save me from being accepted. I was very confused.

Everything deemed strange, my parents wanted me to hate it or not to get close to it: Swedish people, black people, Muslim people, even people with a strange haircut, everything became a threat to their kids and soon I was banned from even leaving the house or talking to anyone or having friends.

I thought that in time this will change and my parents will be different, but no, it got worse, they even banned us from watching Swedish channels.

-No Swedish TV, they said.

This left an even bigger gap between us in the family. Everything was forbidden.

I told my father:

– I thought you brought us to this country so that we could live in peace and to have our freedom, but this Dad, this is prison and its painful. Why don’t you let me adjust to this country, why?

He didn’t answer me.

My older brother left the house and didn’t want to have anything to do with the family, and because he left, I became the oldest of the kids and got the blame for everything that happened.

At home I had to hide the fact I had Swedish friends and  that my best friends were a Muslim girl from Iraq and a Swedish girl. I learned soon to live a double life, like a double agent in FBI or something. At home I never said anything, too afraid to be judged. I never smiled, I never asked for anything, and in school, my mood was always swinging. I was on top and happy some days and screaming and fighting other days, but at least I was reacting, I was alive.

One day I asked my father:

– Do you want me to hate peoples who are different? Weren’t there different peoples in Beirut? Different religions? So if it was ok there, why isn’t it now? You never told us to hate anyone in Lebanon.

He never answered that either.

I thought about it. Of course there were people of different religious identities and colors, and I remember that we all shared the same basement when we were hiding from the bombs, listening to the same radio for news, praying the same prayers, sharing our food and water with each other, and hugging each other when we could go back home in one piece. Why can’t it be the same here in Sweden?

We weren’t the only family having to deal with this dilemma. Others were in a similar situation.

Today my parents are divorced, they live in different cities. They hate each other and they can’t deal with the fact that they have family obligations. We are strangers to each other, so tell me, was it worth it? Was it worth surviving the war? Was it worth moving to a country with no war and no bombs? Here, we don’t have war, but we are no longer a family. This country ripped us apart!

I went for a vacation to Lebanon, after 19 years in Sweden to see if I would feel like home there, but I didn’t. The gap between the people  nowadays are as big as the gap in our family, if not bigger. There are gaps between people because of religion and race, between rich and poor people. Even politics is dividing people and families. I was so disappointed.

Where is home for me?

I am an outsider in Sweden as I am a Lebanese girl and I am a stranger with weird European ideas in Lebanon.

Have you ever talked to a person that says that the best time of her life is when she was hiding from bombs in a basement?

Well, I am that person.

I know it doesn’t make any sense to many, but that was the best time of my life.