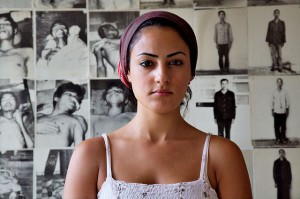 Today I woke up a Girl, I began my daily routine as usual; I cleaned up, brushed my teeth, combed my hair, I got dressed, and drove to the Campus. On my way there, a billboard on domestic violence caught my attention. Will a paper, or a law, solve the sexual discrimination issues? Well at first, it seemed to be plausible.

As I drove on,  as usual, I got insulted for my driving, nobody knows how to drive here in Beirut, only this time the honking was not enough, they had to park next to the car and yell “who teaches women how to drive!?” or “they have a point in Saudi Arabia not letting women drive”. Again, I have to point out that my driving skills did not change.  When I reached the campus, my friends greeted me and we sat down in the cafeteria. Usually we start looking at pretty girls who passed by, and we either flirted them or gave them a core, or even made disgust faces when the girl was less attractive. I used to treat them as objects, now I feel what they felt. However when I was with the girls, it was interesting: they gathered and talked about boys the same way we talked about girls. Only they were less ostentatious, if they were too flashy they would be treated as whores or impolite, in another case if a boy is not flashy and calm he is made fun of and made less of a man than his comrades. When in class as boy, I used to give out my opinion freely knowing that there will be a logical reply, as girl, logic is insignificant, the counter argument is always “what do you know you’re a girl”. Throughout the day the discrimination continued. Whether it came to skills, appearance, intelligence, or opinions women seem to be always inferior in the today’s society.

At first I thought that a mere paper would solve the discrimination issues, it will offer women some protection, along with some civil rights, however it will never give the women the respect they need, it is society’s duty to reeducate the generations on equality, its importance to a nation’s culture, economy, and prosperity.