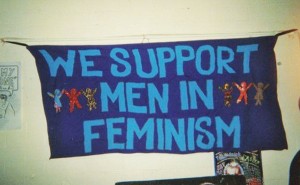 The word a�?feminista�? is being more and more associated with queer women, lesbians to be specific. And, what are lesbians known for? Answer: Hating men. So somewhere along the history of feminism, this link has been created and it has become hard to break this line of stereotypical thoughts.

In all feminist movements women are the main component; there is no question about that. But it seems that lately the a�?poster boya�? for feminism is the type of woman that stands against stereotypes. And with that has formed a new stereotype: the young, short haired, chubby, not interested in men kind of woman. So nowadays, when people hear the word a�?feminista�? they automatically picture an ugly and angry lesbian who hates men. This is how a big number of guys view feminism, because of a lack of awareness about the matter and also because initiatives are lost when they get personal. Any given argument can easily be lost when we raise our voice and step away from reason. Of course being passionate about a subject is important, but the line between rational and irrational is very thin when we are highly driven and emotional about it.

For a long time I refused to be called a feminist. I was in touch with feminist groups that I didna��t see eye to eye with. Their movement was just not my kind of feminism. Feminist is not a person who crushes men to elevate the status of women. Feminist is not a person who hates men simply because of the fact that they are men. Feminist is a person who believes in equality, real equality with no preference of one gender over the other. A man can be feminist too, and, not every man who claims he is only is doing so to try and fish women. A feminist man believes his sister can defend herself. A feminist man would respect the personal space of his female friends. This is my definition of real feminism. Ia��ve seen people start revolutions and then get lost in the many branches they want to expand to. With all due respect to every cause there is out there, we cana��t lose ourselves in all of them. Some of us have enough energy to spread, but the rest dona��t, and this rest is the majority that keeps losing track of all the movements that are rising day after day. Sadly, organizations and NGOs are falling into the same corporate ideals that they wanted to escape in the beginning. Ita��s all the same thoughts, same processes, same ideas and one way of execution. New ideas are only welcome if they are accepted by the elite members, and anybody who sheds some light on a different perspective is attacked and made to feel wrong.

a�?Agree to disagreea�? is a term that was once popular. But today, a�?with or againsta�? describes our situation better than any other term.