DISCLAIMER: This article is not an attack on anybody in particular. This is a mere presentation of an opinion drawn after hearing about a prank. 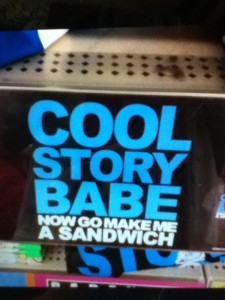 a�?Jerks in masks try to grab girls in the nighta�?.
This is the way a friend of mine described a prank that was aired on national television.

I searched for that episode online, but in vain. Instead, I watched an episode about a prank done to someone who has a phobia of animals. Usually I like watching pranks. Pranks are funny, well; they are supposed to be funny. When people talk about pranks I remember MTV, the music television, I remember Punka��d, fun and light, definitely not the kind that could cause severe psychological issues in a person.

Honestly, the first time my friend told me about this prank I thought he was joking. What kind of respectable television would do such a prank?! People in masks trying to grab girls at night?! How can this represent what pranks are nowadays? I felt disgusted. I really dona��t want to live in this kind of world, where putting girls in the fear of being kidnapped and who knows what else is considered a prank. To me, this would pass better as a documentary about how dangerous some areas are in Lebanon (if not all) for girls at night. I would have never thought that someone could have phoned this program in the intention of pranking some friends this way. Sadly, this is the reality we are forced to accept.

How can this kind of prank affect a person?
Assuming the girls have no prior existing fear or paranoia, this could be the trigger of future psychological issues. These girls could develop unexplainable fear, they can be terrified at the sight of a van for example, or even be paranoid if they notice some guys walking behind them on the street for a couple of blocks. Their comfort level can easily shift. Their self-confidence might drop as well. They can become anti-social, they can be intimidated by the smallest of things, they can go through depressive times and have issues trusting themselves and their judgment as a start, and then others. The personality of each person can determine to what extend this person is affected by being put in a challenging situation. The sad part is that all the above is the best scenario for the aftermath of this prank. What if the girls have had a past experience in which they had been part of a kidnapping or they had been subjected to violence and sexual harassment? Who is willing to take responsibility for putting these girls through the emotional and mental exhaustion of reliving a past experience and then adding the heavy weight of this new one? I cana��t speak on behalf of these girls; nobody can. Ia��m not a girl, and I havena��t experienced anything remotely close to this horrible joke. What Ia��ve lived is a physical injury where I felt handicapped and unable to be myself as I see myself. Even in the difference there are similarities: something being taken away, feeling incomplete, feeling the loss of control over onea��s life, being trapped, wanting to break free, etc. It took me a long time to be able to rehabilitate, and what I went through was not as traumatic, nor as stressful, nor as nerve wrecking as it is to be grabbed by guys in masks at night. The brain does not understand the difference between reality and a prank. Those girls, and anybody who faces similar jokes, do not have the time to think and analyze to be able to conclude if this is a joke or not. The brain reacts, on the spot. And, usually, the results have a long lasting effect on the person, their self-image and their relationships with others.

This prank is a disgrace. It promotes violence against women. It promotes scaring tactics to detain our society. It even induces psychological damage that could last a lifetime and impair different aspects of peoplea��s lives. The fact that this program is still airing is beyond me and it reflects the type of society we live in.