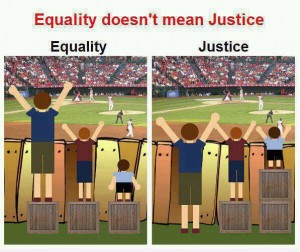 I always hear that men and women should be equal. On paper, I agree with it. But practically, it’s not doable. Men and women are not equal, and chances are they will never be. When you have two of one thing, there’s a power dynamics at play. There are two genders, two roles, two social constructs, and until the stigma attached to both of them is removed we can only dream of having equal rights and equal opportunities between both genders.
I think the most beautiful thing is that these two genders actually complete one another. We can’t have a man without a woman and we can’t have a woman without a man. And nobody should feel less of a person because of that. We should be willing to give ourselves a chance to see that and accept it in order for everybody to move forward and not have anybody left behind.
The main arguments I hear are that anything a man can do a woman can too. I’m sorry to be the devil’s advocate, but that isn’t true. There have been researches that prove that men and women function differently and exceed in different areas. If we want to take this as a rule, we should understand that there are always exceptions to the rules. Yes, of course there are women who are physically fit and could win a fight against a guy. But how many are there? We neglect the biological difference between men and women and I would like to bring my testimony to this:
I’m transgender. I was born female and I’ve undergone gender reconstruction. There are very obvious physical differences between men and women, and transgendered people are the only ones who know it firsthand. In every scientific research, the comparison can only be done with ONE variable. So, to compare men with women is not a valid equation; we can’t compare different people in different stages in their lives, but what we can do is compare one person before transitioning and right after and of course check the progress over the years. Transgendered guys, like myself, simply get stronger (physically) when testosterone is introduced in their bodies. The mass of body muscle spreads in a way that is different from girls. Without even exercising, the level of physical strength gets a boost. In addition, we get angry faster, and we flip faster too. But, what used to get us emotional before just doesn’t do the trick anymore. It’s not that guys are jerks; we just are built in a certain way. In contrast, transgendered girls feel like they’ve gotten weaker over time. Their physical strength diminishes, they get emotional a little more often and over things that wouldn’t have gotten them emotional before, and their tolerance for alcohol lessens.
What I’m trying to do here is take one person and compare how they were with how they are. I think that is the best way we can understand the differences between both genders, within the same person. This way nobody can argue that this girl is built differently from that guy (DNA, predispositions, etc.). We are talking about the same person, just in transition (physical transition) from one gender to the other.
Equality sometimes can be unjust. I think it’s not fair to ask for equal conditions for women in the military, for example. In the Lebanese law, we have 19 bullet points that describe the kind of work women are not allowed to be in.
We could get lost in the fight for equality, because people can see it any way they see fit. How many times have I heard “Women want equality? So if I hit a guy, that means I can hit a girl!”?! The truth remains that violence is a problem, whether used against men or women, and that violence should be taken off the table in all cases. Equality can be interpreted in many different forms but justice can only be seen in one way: equal rights, equal opportunities, no discrimination and no preferences.
“Everybody is a genius. But if you judge a fish by its ability to climb a tree, it will live its whole life believing that it is stupid.”