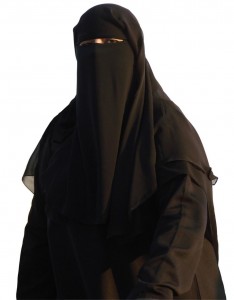 Modern Islamic dress code has become a topic of much controversy and heated debate around the world. A number of countries have banned the wearing of these garments: hijab, which covers the woman’s body, leaving her face and hands visible; niqab, which covers everything except the eyes; and burqa, covering all parts of the face and body.

Many arguments have been made against the wearing of these types of dress, especially the niqab and burqa, claiming they are anti-social, backward, oppressive and not part of Islam. Opposite arguments depict the ‘Islamic dress’ as a symbol of mandatory religious practice prescribed by the Quran (“O Prophet! Tell your wives and your daughters, as well as all believing women, that they should draw over themselves some of their outer garments [when in public]: this will be more conducive to their being recognized as decent women and not molested. “Quran 33:59), or of compulsory/optional acts of virtue, or even of freedom.

According to some scholars, the hijab, burqa and niqab have an Islamic basis and they have been commonly practiced and recognized throughout Islamic history. They claim that Muslim women who choose to wear the burqa do so out of their own free will, believing it is an act of worship and a form of liberation from the objectification of women in modern society. For some Western convert women, ‘my body is my business, and I shouldn’t have to defend what I wear to anyone’ or ‘the fact that I choose to wear this dress does not make me any less human’, or ‘Modern societies were founded on the basis of freedom and liberty; this entitles their members to freely practice their own religion and dress code as they wish; thus banning Islamic dresses goes against these very core values and is a form of hypocrisy and double standards’ – referring here to the ban of face veil in many European countries which has been interpreted as an act of discrimination and oppression against Muslim women, especially at a time when extreme right wing parties are gaining popularity.

The practice of veiling the face can be traced back to pre-Islamic civilizations. “The badekin ritual is a Jewish wedding custom apparently rooted in the Old Testament of the Bible (Genesis 29: 19-27), and involves the groom veiling and then unveiling his bride’s face before and after the marriage ceremony respectively. A more idyllic interpretation of the badekin ritual is that it is a gesture to show the groom’s protection over his bride, and it demonstrates his acceptance of her beyond a superficial desire for external beauty. According to the Torah, the masveh (Hebrew term for veil) covered Moses’ face to filter divine glare. Similarly, when the groom lifts the veil from his bride’s face, he is the first to witness the glow of purity that emanates from her face. More profoundly, from a Judaic perspective, the masveh serves to separate man from God for him to better realize the transcendent reality of the unseen God. There are also other non-Islamic examples of women veiling. Lloyd Llewellyn-Jones, in his book entitled “Aphrodite’s Tortoise: The Veiled Woman of Ancient Greece”, asserts that extant textual and artistic references point to the habitual veiling of women of high status in public in ancient Greece.

Also, 15th century Crusaders viewed an Arab woman’s veil as a symbol of feminine purity, and this admiration later translated into the Christian virginal white bridal veil. Dubbed the father of Latin Christianity and known for coining the term “Trinity”, the early Christian apologist Tertullian (Quintus Septimius Florens Tertullianus) clearly described veiled pagan women of a pre-Islamic Arabia. In his book entitled “The Veiling of Virgins” (200 AD), Tertullian wrote that pagan Arab women “not only cover their head, but their whole face, preferring to enjoy half the light with one eye rather than prostituting their whole face.” It is worth mentioning that an unveiled woman in Islam is not described as “prostituting her face”. What is undoubtedly clear is that the face veil has historically been viewed in a positive light as a respectful symbol of feminine purity and modesty, and not always as a symbol of oppression or subjugation as currently perceived. It has been suggested that such evidences of face veiling in a pre-Islamic context may be ignored in order to dissociate a perceived superiority of these civilizations from the current negative status of the Muslim niqab, the “alien other” that defies the social norms of today’s fashion trends, or what is deemed socially acceptable. During the latter part of the nineteenth century, liberals and reformers began to castigate women’s religious clothing, aligning assimilation of liberal western culture with progress”.

For many scholars, modern Islamic dress code including hijab, niqab and burqa, is the product of ancient pagan cultures, and has no basis in Islam – which provided a means to avoid implications of discrimination against a religious minority, especially for politicians. The late Sheikh Tantawi of Al-Azhar Mosque and University is one of the most quoted Islamic scholars to have openly supported a ban against the niqab. Another prominent member of the council of clerics at al-Azhar, Abdel Muti al-Bayyumi, is quoted as saying, “I want to send a message to Muslims in France and Europe. The niqab has no basis in Islam.” He further added, “I personally support the ban and many of my brothers in the Islamic Research Academy support it.” As a result of underlying differences in interpretation of the Qur’an and Sunnah concerning modesty and dress code, an internal debate surrounding the face veil has persisted among Muslims throughout Islamic history. Although the majority opinion in Islamic scholarship is that veiling the face is not obligatory, there is still a minority of Muslims supported by scholars who support the view that it is obligatory.

Recent heated debates in some Middle Eastern circles of civil society activists (Egypt, Tunis, Morocco, Lebanon) include the following: forcing a woman to veil translates into subjugation of women (the issue of niqab and burqa is not a religious issue, it is a question of freedom, equality and of women’s dignity) – reference also to forced sequestration and marginalization; versus a woman who is denied her right to choose also falls victim to subjugation and oppression. Furthermore, ‘veiling’ is an Islamic obligation one should follow; versus while religious fatwa (religious verdict) did not necessitate the niqab, religious taqwa (the desire to excel in faith) demanded women to cover their faces; versus Islam is not about oppression and unveiled Muslim women are not prostitutes.

And the debate continues…